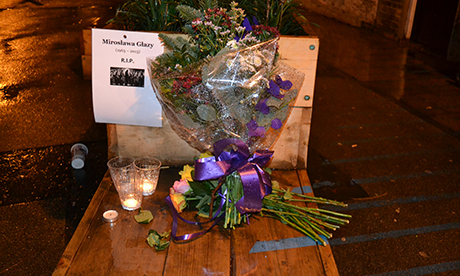 Flowers were laid at the spot where Miro Glaza was attacked at a vigil late last year. Photograph: Josh Loeb

A man from Hackney who killed Polish migrant Miro Glaza in the Narrow Way, Hackney Central, has been jailed.

Rafal Lewsza, 37, of Leaside Road, Clapton, was sentenced to 19 months in prison at Snaresbrook Crown Court after pleading guilty to the manslaughter of Miroslaw ‘Miro’ Glaza, 50.

Mr Glaza, known as Miro Glaza, was drinking with a group of friends on 1 November last year when Mr Lewsza punched him, causing him to fall face first onto the pavement.

Police arrived at the scene and spoke to the group, who told them Mr Glaza had drunkenly fallen over. However, witnesses from a nearby property told officers that Mr Lewsza was responsible.

Mr Glaza was taken to the Royal London Hospital in Whitechapel where he died five days later from a resultant bleed on the brain.

Detective Inspector Robert Pack of the Homicide and Major Crime Command said: “Miroslaw Glaza came to the UK looking to make a better life for himself. He was not a violent man and his death has naturally left his family and friends devastated.”

Mr Glaza leaves behind a wife and two children who still live in his home city of Bydgoszcz, Poland. He regularly attended a weekly soup kitchen in the Round Chapel on Lower Clapton Road, and volunteers held a vigil in December at the spot where he was attacked.

Invisible and living on our streets: the plight of Hackney’s homeless