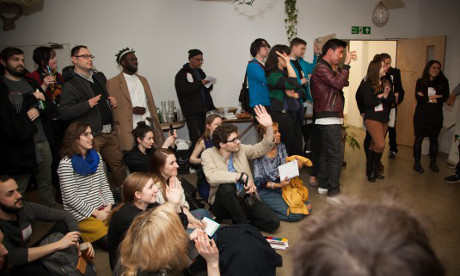 A pop-up school offering classes in everything from music-making to business strategy, time-management and sustainable development opens in Dalston this month.

The LBB (Let’s Be Brief) Pop-Up School, described as a “revolution in education” by its co-founder Ansel Neckles, opens on 17 March for two weeks at The Print House in Dalston following a successful launch event earlier in the month.

Despite following in the footsteps of fleeting arts events and boutique burger bars, Neckles insists the school is not simply popping on the pop up bandwagon.

“For us it’s to do with immediacy, relevancy and necessity. Pop-ups are often born out of necessity – not being able to inhabit a place for a prolonged period of time, but needing to make a mark,” he says.

“It’s about galvanising people’s thinking, and a fun, innovative way of travelling light, being flexible. Often access to this type of thing can be quite prohibitive, we want to do away with the prohibitive approach and give people access to the kind of things they need.”

The events, which will run until 28 March, are open to all and include a ‘WordPress Weekend’ workshop, a masterclass on time and project management, and a talk on community building, on and offline.