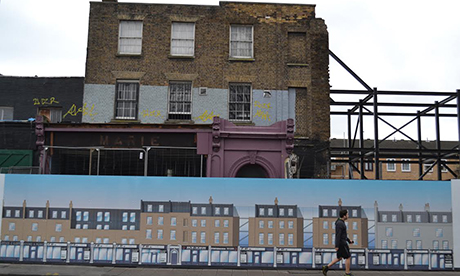 Rare survivor: one of the Georgian era homes now set to be demolished

Lisa Shell was one of several objectors who spoke against a successful application by engineering firm Murphy to knock down 16 houses at 48 to 76 Dalston Lane in order to replace them with new buildings in ‘heritage likeness’.

She told last night’s planning sub-committee meeting that demolition ran contrary to the council’s own policies, adding: “If you vote for refusal of planning permission you will be voting to preserve the quality and character of the existing terrace and the applicant may have to make some minor adjustments…but if you allow the total demolition of this terrace, which is in the historic centre of Dalston, you will be setting a very dangerous precedent within the borough.

“Vital planning and conservation policy would have significantly reduced capacity to protect Hackney’s historic environment against the appetite of commercial investors.”

The council, which owns the historic buildings, has entered into a deal with Murphy to create 44 new flats – none of which is classed as ‘affordable’ – as well as retail units on the site.

The terrace is located within a conservation area and the council received 785 letters of objection to the plan.

Campaigners from interest groups including OPEN Dalston argue it is possible to retain at least part of the terrace using masonry stabilising techniques, but architects for the developer told the meeting all parts of the terrace were in too poor a state to be preserved.

Hackney Council began demolishing the terrace earlier this year but was forced to suspend the work after campaigners pointed out that it did not have legal permission, but the destruction is now set to commence again imminently after the planning sub-committee resolved to allow it.

The vote was tied, with four members of the sub-committee voting in favour and four casting their votes against.

Planning sub-committee Chair Vincent Stops had the casting vote and voted in favour, meaning the application was passed.

Amenity groups including the Hackney Society, Georgian Group and Society for the Protection of Ancient Buildings had called for the buildings to be preserved.

The latter wrote to the council: “The new buildings will be a pale shadow of the existing structure… Any sense of patina or age will be eradicated and a great deal of the spirit of the place will be lost forever.

“This would seem to be an unjustified and undignified way to treat a worthy and much valued, though undesignated, heritage asset.”

The saga of 48 to 76 Dalston Lane has lasted over a decade and has been extensively documented by OPEN Dalston founder Bill Parry-Davies on the conservation group’s blog.

The council acquired the terrace from the Greater London Council in 1984 and sold the buildings to an off-shore company at auction in 2002.

The terrace subsequently suffered severe structural damage including fires, after which the owner applied for permission to demolish the buildings and replace them with retail units and 28 flats.

In 2010 the council repurchased the terrace for double what it had sold it for and pledged the 19th century facades would be preserved as part of a ‘conservation-led’ scheme.

Mr Parry-Davies says that from the time the council first acquired the terrace to the present day, 14 businesses have deserted the terrace.

He has accused the council of “presiding over the destruction of our heritage assets”.