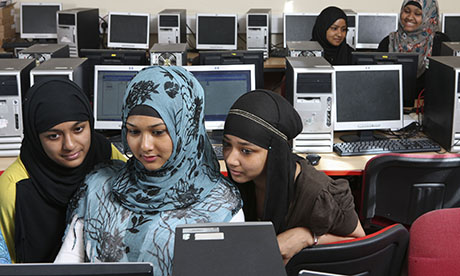 Pupils at Nightingale Primary School on Rendlesham Road are taking on the niche industry of computer programming ahead of national curriculum changes this September that mean every child aged five to 16 will learn to code at school.

In line with the so-called Year of Code the Year Six pupils, led by their teacher, ICT Co-ordinator Shahrina Ahmed, are trialling Codeacademy website’s self-taught modules and learning basic programming.

Miss Ahmed said the pupils were trepidatious at first but understood the potential of learning to code and were excited to be the first to have a go.

As for the teachers, she said: “It is a little daunting because it’s like getting trained again but then having to teach it simultaneously.”

He said: “More and more of our students are interested in coding and are using websites like Codeacademy.”

When asked about the current gender gap in girls studying computer sciences, he said their classes were fairly equal – in his GCSE IT class, 12 out of 26 students are girls and in the BTec IT class it is 50/50, compared to only five years ago when he estimated 15-20 per cent were female.

Teaching Year 1 kids will dispel myths from the ground up and so far girls have been enjoying the new software just as much as the boys.

Under guidance from the British Computer Society (BCS), the Royal Academy of Engineering and technology companies including Google and Microsoft, the new coding curriculum will replace existing ICT lessons.

According to Education Secretary Michael Gove students are “bored out of their minds” by lessons in Word and Excel. Coding is in line with how students consume technology, and Mr Sahbaz’s says the fact that sixth formers “are already using code on their iPads” will only heighten their appetite for learning about the subject.

‘Even Michael Gove gets it right once in a while’

Martha Lane Fox, co-founder of lastminute.com and the UK’s former ‘digital champion’ said that the numbers of girls studying maths, physics and computer-based subjects at school was terrifyingly low.

However, coding lessons could bridge the gap.

Most agree it is the way forward and the policy has been met with relatively little opposition from Gove’s usual critics.

“I’m all for giving kids the chance to try coding at school.

“It seems even Michael Gove gets it right once in a while,” said Henry Stewart, a governor at Stoke Newington School and founder of the digital firm happy.co.uk.

A nice cohort of private technology sponsors have joined in hoping to create workers who are self-sufficient when it comes to computers.

The digital recruitment website Bubble warned its users: “If you can’t do basic programming or refine a simple bit of CSS, some employers just aren’t interested – and it really is that simple… you need to be self-sufficient.”

It’s all about straightforward logic – computers don’t think, hence the term ‘artificial intelligence’ – their so-called intelligence consists of following clear, precise instructions in a pathway of steps and the skill, or art, lies in making those instructions – code – as concise and succinct as possible.

Many of the world’s best-known programmers (Jobs, Gates, Zuckerberg), are self-taught obsessives with a drive to create beautiful code.

As fourteen year-old prodigy programmer Santiago Gonzalez put it: “Beautiful code is short and concise so that if you were to give that code to another programmer they would say, that’s well-written code.

← ReachOut, the mentoring scheme in a class of its own, celebrates grades riseGang culture shot down as Our Lady’s Convent School students get organised to combat crime →