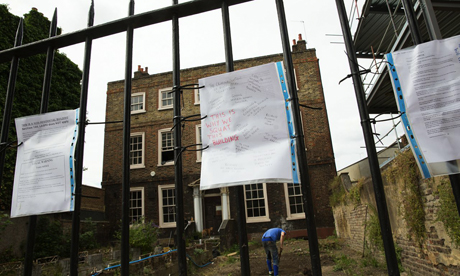 Squatters occupying a historic grade-II listed mansion say they are carrying out repairs to the building and hope to start staging cultural events there this month.

The Georgian-era residence at 195 Mare Street has been lying empty and derelict for many years and is recognised by amenity group The Hackney Society as a major heritage asset because of its associations with the social reformer Elizabeth Fry, who established the Institute for the Reformation of Women Prisoners in the building 1845.

The building later became the Landsdowne Social Club, which closed in 2003.

The Hackney Citizen understands the freehold was recently sold, though the identity of the buyer is unclear.

One of the squatters, who refused to give her name, said: “We don’t want this to be a squat just for squatters, we want it to be an open space for the community.”

She added: “It is better now than it was. We have been working on it and cleaning it. We hope that if we can stay here we can stage a performance this month.”

Another of the occupiers said: “The opponents of squatting are always focusing on the negative behaviour of a few squatters rather than on people’s right to housing.”

The squatters have been dishing out free vegan burgers. They say they want to highlight the lack of affordable housing.

Residential squatting became a criminal offence last year but the offence does not cover commercial buildings.