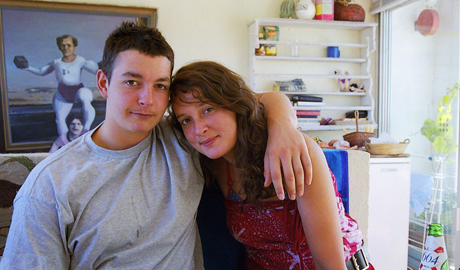 Vulnerable mental health patients from Hackney are ending up in prisons and police cells because of inadequacies in how they are being cared for.

This disputed claim is being voiced by supporters of Joe Paraskeva, a young bipolar affective disorder sufferer who was sentenced to spend the rest of his life in custody after being convicted of arson three years ago when he was aged 21.

Mr Paraskeva’s mother Linda Morgan fought a hard but ultimately successful battle to have her son’s sentence quashed and was backed by his old schoolmates from Stoke Newington, campaigning newsagent Hamdy Shahein and newspapers including the Hackney Citizen.

Landscape gardener Ms Morgan celebrated with friends on the steps of the High Court late last year after a judge quashed Mr Paraskeva’s sentence, which could have led to him spending the rest of his life in custody.

But she says she will fight on to overturn her son’s conviction.

The background to the case is complicated, but Ms Morgan’s argument can be reduced to this: Joe was ill at the time of his “crime” in October 2010.

Doctors at a psychiatric ward run by East London NHS Foundation Trust in the grounds of the Homerton Hospital had sectioned him under the Mental Health Act for a period of assessment of up to 28 days.

But after Mr Paraskeva made a failed escape bid less than 48 hours later by trying to burn a hole in a door, a consultant decided he was mentally well – a baffling volte face that set in motion the Kafkaesque legal process leading to the young patient’s incarceration.

Mr Paraskeva spent time in Chelmsford Young Offenders Institution and is now being cared for in a psychiatric hospital.

He says he is doing well, hopes to get work and is considering taking a course in catering.

He has regular unescorted leave when he can visit his family and frail 18-year-old cat Honey, who apparently “hung on in there” despite her advanced years so as to welcome her beloved owner home with a hearty meow when Mr Paraskeva finally returned to Stoke Newington after spending 13 months behind bars.

In his first comments to a newspaper since his sentence was quashed, Mr Paraskeva told the Hackney Citizen he wanted to thank “all my friends and family, and my mum for doing all the campaigning”.

“I also want to thank Hamdy for being very supportive and helpful,” he added.

Mr Paraskeva, who received thousands of cards from well-wishers while he was in prison, said: “It was nice to realise so many people actually cared. It was a step in the right direction.”

Ms Morgan describes the period during which her son was in prison as “horrendous torture for myself and Joe’s family”.

Another young inmate in the same institution apparently took his own life while Mr Paraskeva was serving time.

“We didn’t know if he was alive or dead or what was happening to him,” Ms Morgan says. “Joe could still be in prison, or as far as I’m concerned, he could be dead, if we had not raised the money to get an independent psychiatric report.”

That report led to Mr Paraskeva being transferred from the prison to Hackney’s John Howard Centre – but only after a delay of several months.

Ms Morgan had, reasonably enough, argued that her son could not have been charged with arson if he had not had access to a lighter and aerosol on the ward in the first place.

“My problem lies directly with the hospital,” Ms Morgan says without hesitation when asked who she blames for her son’s ordeal in prison. “I don’t think the police want to criminalise people. They did not want to keep Joe in custody, and they knew he was unwell.”

She says the trust’s apology “helps in the battle to get Joe’s conviction overturned”.

Ms Morgan, 58, says prison staff and others involved in the criminal justice process have spoken to her about the difficulties of dealing with the many mentally ill people who pass through their doors.

The criminal justice system is, she claims, increasingly being called upon to deal with the fallout from an under-resourced NHS – psychiatric patients who should really be the responsibility of healthcare professionals, but who hospitals are not properly able to deal with because of stretched resources.

“There are a lot of issues around bed availability,” says Ms Morgan. “I cannot understand why someone who was as disturbed as Joe was – and you do not section someone unless they are really unwell – was then taken from the ward by the police.

“I said at the time that I could understand the police need to sometimes be involved. The hospitals don’t have the staff resources, and I felt that the police could be brought in perhaps as a last resort to help the staff manage an uncontrollable patient.

“But the police role should be to support the staff and perhaps to sedate the patient, perhaps to transfer him to a more secure unit, not to take him from a hospital setting into a police station and then transfer him into prison.”

The trust, for its part, has said its resources are “appropriate for our patient needs”.

A spokeswoman for the East London NHS Foundation Trust said: “While we are not able to go into specific details about individual cases, because of our duty of confidentiality to patients, we can confirm Mrs Morgan’s complaint was the subject of a formal and thorough investigation. The investigation revealed some issues around an initial assessment and action has since been taken to address them. Our chief executive, Dr Robert Dolan has responded personally to the family and apologised. We are continuing to liaise with family.”

She adds: “Joe’s behavior was terrifying for everyone. I totally understand the police being called. You do not then need to criminalise him forever because of that. He was mentally unwell at the time. He was severely psychotic and disturbed, and he was in the right place, he was in a hospital.

“That is where he should have remained for his care and treatment, not be sent to a prison cell where there is absolutely nothing, and then have to live for the rest of his life with a conviction for arson, which is one of the most serious offences.”

She says she is continuing to raise these issues because “it could happen to anyone”.

“For every Joe who has been able to have been got out of prison, there must be hundreds more from Hackney who are still in the prison system,” she says. “Because if he can slip through the net, a lot of others can too.”