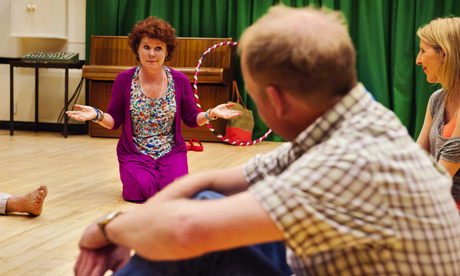 The play is set in a community centre in Vermont, New England, and it is being staged in the Rose Lipman Building, De Beauvoir Road as part of the Royal Court’s Theatre Local project.

With a cast including big name actors Toby Jones and Imelda Staunton, it’s probably fair to say De Beauvoir has never seen anything like it.

Through a series of short scenes, brief, pregnant dialogue and interrupted thoughts, the piece – which has a running time of two hours with no interval – reveals insights into the lives of four participants attending a weekly drama class, and their hippyish teacher Marty, played by the intensely watchable Imelda Staunton.

The play is as much about what we know about ourselves as it is about the characters on stage, and it takes little time for that recognition to translate into laughter.

The delicacy of touch employed by the actors in creating these flawed, unpoetic characters is by turns hilariously funny and crushingly sad.

Staunton has the audience rapt in agony as her character reels in pain at the climax of the play.

In the world of Circle Mirror Transformation, truth and fiction co-exist. As touches of sound and lighting design gradually lull the audience further into the world of fiction, one’s increasing understanding of the characters draws one closer to truth and humanity.

At one point the play’s gentle soundscape of what might be happening along the hall is echoed by the real shrieks of children playing out together in the summer evening in Hackney.

It is the perfect accompaniment to a sometimes painfully honest piece of work.