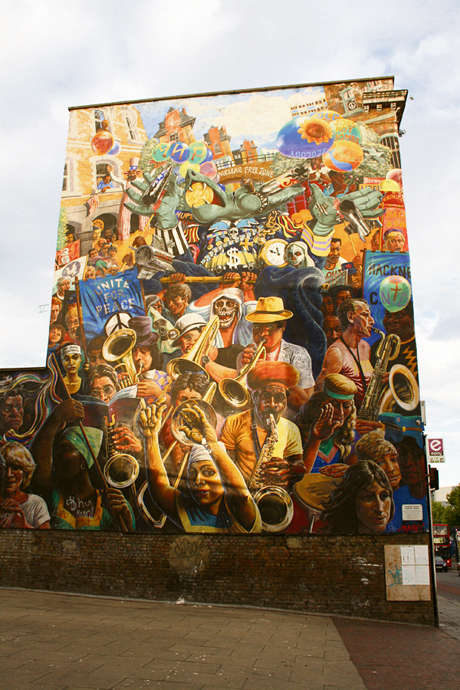 The future of one of the borough’s most famous artworks, the Dalston Peace Mural, is under threat according to campaigners.

The image stands on the side of a four story property that Hackney Council has voted to lease to a private developer.

That move is now being questioned over the apparent lack of public consultation and concern that the longstanding and culturally significant mural is now the responsibility of a private building firm – Dalston Lane Property LLP.

Earlier this month, the OPEN Dalston website (OPEN standing for Organisation for Promotion of Environmental Needs) reported on the council’s proposals and the developer’s plans to build a restaurant and bar in the area incorporating the Peace Mural building.

OPEN’s founder, Bill Parry-Davies, said: “The Dalston Peace Mural is an iconic cultural landmark and part of a building which Hackney bought in 2010 and has become derelict. The structural repairs may include rebuilding the front and rear walls, during which the side wall with the mural could be potentially vulnerable and in a precarious state.”

However, Cllr Karen Alcock, Hackney Council Cabinet Member for Property and Housing Policy, said in a statement that Hackney Council is committed to protecting the mural.

“Dalston Peace Mural is an important part of Hackney’s cultural landscape, we know how much it means to people and it is not going anywhere.”

The Labour councillor said: “Currently the property is in a very poor state of repair and requires more than £420,000 of urgent structural works; but Dalston Lane Property LLP are willing, under the terms of the lease, to carry out this work and protect both the building and the mural.”

Hackney Liberal Democrat spokesman, Tony Harms, said: “While we recognise that the mural can theoretically be safeguarded as part of a lease, the council’s record both on protecting public art and on enforcing legal agreements is not good. It was the Council which vandalised the Stoke Newington Church Street Banksy and attempted to destroy the ‘Hackney Hare’”

The Dalston Peace Mural, standing opposite Dalston’s Overground entrance and familiar to anyone living in the area, is based on Hackney’s 1983 Peace Carnival.

It was designed by the socially conscious artist Ray Walker but, owing to his early death in 1984 (aged 39), it was completed by his friend, Mike Jones, and wife, Ann Walker, in 1985.