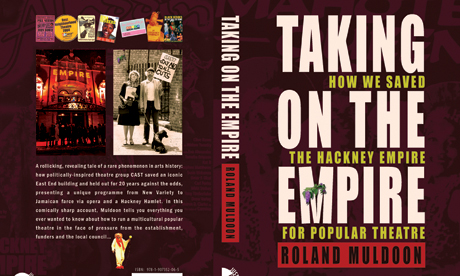 How the empire struck back: Roland Muldoon's book

What do Russell Brand, Rhod Gilbert, Matt Lucas, Paul Merton, Catherine Tate and Lily Savage have in common? They all rose to fame in the 1980s and 1990s via the Hackney Empire.

On 9 December 1986 the Empire was transmogrified from a bingo hall into a theatre. A courageous band of leftish actors and entertainers had undertaken the heroic task of turning the dilapidated listed building back into the major arts institution that it is today, and Taking on the Empire is the tale of their project.

The members of CAST (Cartoon Archetypical Slogan Theatre), led by Claire and Roland Muldoon, had since the 1960s been pioneers of what they called the ‘new variety’ – humorous comedy and theatre with a radical bent. Come the 1980s, public funding had all but dried up, while at the same time, ‘alternative comedy’ was taking off.

This combination of factors, together with the urgent desire of Mecca Bingo to rid themselves of the liability that was Frank Matcham’s 1901 music hall building, set the stage for the reborn Empire. With £8,000 that had been stashed away under the floorboards, the CAST crew refurbed the structure and started staging shows.

CAST’s interest extended much further than alternative comedy. The group was committed to bringing theatre to the people. And given the ethnic composition of late twentieth-century Hackney, this meant developing black acts, best encapsulated perhaps in the venue’s regular 291 Club which eventually morphed into the eponymous Channel 4 television show.

Funding was a perennial issue for the Empire. Hackney Council had its own plans for the cultural regeneration of the borough which at times clashed with those of the theatre. Moreover, larger arts organisations looked somewhat askance at the idea of radical actors managing a moderately large venue.

Yet despite all the odds, the Muldoons managed to retain control of the Hackney Empire for nearly 20 years, during which time the theatre developed an international reputation.

Taking on the Empire is a fascinating chunk of social history, with numerous priceless nuggets of information. At 346 pages it is a bit long-winded, and one wonders whether it might have benefited from cleaner editing and greater precision, especially when it comes to dates. That said, this book will surely be gobbled up by those interested in the social and cultural fabric of our times.

Taking on the Empire: How We Saved the Hackney Empire for Popular Theatre by Roland Muldoon is published by Just Press, ISBN 978-1-907352-06-5.