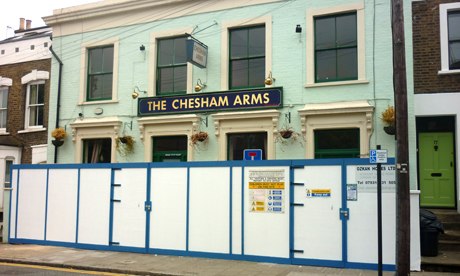 Listed as an 'Asset of Community Value': the Chesham Arms in Homerton. Photograph: Jessica Smith

The Chesham Arms has become the first building in Hackney to be added to a new register of key community assets in the borough.

The pub, on Mehetabel Road, Homerton, has been listed an ‘Asset of Community Value’ (ACV), thanks to a campaign by local people to save it from extinction.

After operating for nearly 150 years, time was called on the watering hole last October when it was abruptly sold.

Speaking on behalf of the Save the Chesham campaign, local resident Martyn Williams said: “We are delighted Hackney has formally recognised the importance of the Chesham Arms to the local community. The Chesham was a good old-fashioned local pub used by a huge range of local groups, from teachers and doctors to footballers and the church bell-ringers.

“Places to socialise are vital for thriving communities, and while the traditional back street boozers are under threat across the UK, we are determined to save this one.”

The register of the Assets of Community Value is a relatively new protection allowing local groups to apply for buildings or land that are much valued by their local community.

Being listed as an ACV allows the local community six months to put together a bid for the property.

The Chesham Arms has also been added to Hackney Council’s list of non-statutory heritage assets. This is a list of all local assets that are of historical, environmental or architectural significance.

Labour London Assembly Member Jennette Arnold OBE said: “It is actions such as these which will help to save local community pubs.”

Last December, the Citizen reported on a neighbourhood dispute in Homerton  concerning the abrupt sale of the pub, which lies within the Clapton Square Conservation Area and in 2007 was listed as one of the most important buildings in the area.

Susan Beringer, who lives in Mehetabel Road, said: “Suddenly one Tuesday they put up the hoarding, which is illegal. They haven’t got planning permission for the hoarding. Everybody is very unhappy with the pub being closed down.”

But the council has since then asked the owners to remove the hoardings by serving them a Planning Enforcement Notice.

The owners have said they are not seeking to make a planning application. The response from the campaign was that until the building is formally put up for sale, the six month period for a bid to be made has not begun.

Sue Chester, a resident of Mehetabel Road for nearly 30 years, described the Chesham Arms as “an institution”. She said: “The Chesham will be sadly missed as a much loved, well used local amenity which is part of the local fabric and history of the locality.”