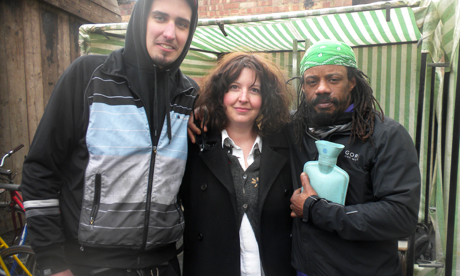 It is not known whether the two incidents were related.

Netil Market manager Sarah Bates, 29, said footage taken from a nearby CCTV camera had not helped to shed light on the mysterious incident as the camera had been pointing the wrong way, but added that the area was now covered by CCTV.

Cycle Pit Stop owner Jusus Telesford, 44, said his shop had been broken into a month before the blaze in the early hours on March 16, adding: “We think the fire might have been started by bike thieves. We have our suspicions about who is responsible but can’t point the finger because there is no evidence.”

The business, which has been in existence for nearly three years, trains young people from east London, provides children with free bikes and is the sole livelihood of Mr Telesford and his colleague Andrew Bonometti, its manager.

Mr Bonometti, 21, said: “I was very upset when I heard the news. We lost 20 bikes, and tools as well, and the hut burnt to the ground. We are not going to let this stop us. We are going to rebuild.”

A Met Police spokesman said they had been made aware of the two incidents and are investigating. No arrests have been made.