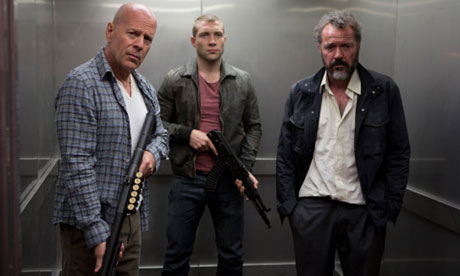 It is six years since Die Hard 4.0 was released, which saw young director Len Wiseman take the franchise (now spanning 25 years) into the modern world and threw John McClane [Bruce Willis] into battle with a computer-nut terrorist [Timothy Olyphant] looking to cripple America’s infrastructure from his laptop and our aging hero cop faced a challenge that was out of his comfort zone and expertise.

Now the fifth instalment of the saga, A Good Day to Die Hard, directed by John Moore (Max Payne, Behind Enemy Lines), again sees McClane out of his comfort zone as he travels to Russia to track down his son, Jack [Jai Courtney], who at the start of the film appears to be involved in criminal activity relating to murky Russian politics. Unsurprisingly, it doesn’t take McClane long to get himself in the middle of proceedings and when he does, he predictably sparks off mayhem which the bad guys are not expecting and he leaves a trail of carnage, mainly during an outrageous freeway chase to rival the one in Die Hard 4.0 – and that takes some doing considering that it featured a fighter jet chasing a lorry!

Apart from the cyber-terrorism plot in the preceding film, there was a subplot involving McClane’s daughter, Lucy [Mary Elizabeth Winstead] – who appears again in this film – as well as good banter between McClane and hacker geek Matt [Justin Long] who unwittingly ends up helping him eliminate the threat. In A Good Day to Die Hard, the focus is McClane’s son, whose awkward relationship with his dad the writer Skip Woods (The A-Team) and director Moore clearly feel they can use to create the lion share of laughs and emotional intrigue.

The main storyline follows Jack, who is in fact a CIA asset, on his mission to obtain a target named Yuri Komarov [Sebastian Koch] – who has been in prison for five years and is due to stand trial – and get him to give up the location of a sensitive file supposedly containing incriminating evidence relating to Russian official Viktor Chagarin’s involvement in the Chernobyl disaster. Unfortunately for him, a criminal outfit powered by Chagarin [Sergei Kolesnikov] has the same objective and carnage ensues, especially as McClane initially scuppers the operation before helping Jack attempt to recover the situation.

There are a few twists and turns along the way and a trip to Chernobyl itself, as the depth of corruption unravels and John and Jack – the latter ever-reluctant to work side-by-side with his dad – end up taking on the heavily-armed criminals all by themselves.

A Good Day to Die Hard is certainly entertaining, the action is borderline ridiculous (especially the excessive use of slow-mo) and there are explosions galore – all of which are expected in a Die Hard film – but unfortunately it suffers from a weak plotline, a slightly cheesy script and the lack of a charismatic, menacing lead villain. There are the trademark McClane smirks and one-liners on show, but they are lacking punch and are a little predictable. The frosty relationship between father and son is stretched and laboured to the point where you feel like screaming: “Yes, we know McClane has not been the most attentive father, we know that in turn Jack has hurt his father by not contacting him and we get that McClane is old school, while Jack is a driven CIA agent! Stop going on about it!”

Despite this, it is still a fun, fast-paced action film, clocking in at just over an hour and a half, and is worth a watch, if only for the freeway chase and the climatic shoot-out, both of which are Bond-esque in their scale and daring.

A Good Day to Die Hard is showing at the Hackney Picturehouse until mid-March.