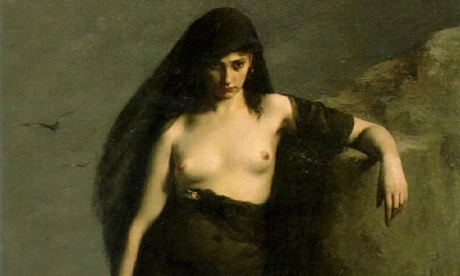 On a cold winter’s evening and following intensive rehearsals, Second Skin Theatre’s Jessica Ruano is nonetheless eager to chat about her new production, Sappho…in 9 Fragments, which opens at White Rabbit in Stoke Newington this month.

It will be Ruano’s directorial début for the company – the Canadian has played a production role for the past year – and she is keen to demonstrate her creative prowess to a UK audience for the first time.

The play, written by Jane Montgomery Griffiths, explores the character of Ancient Greece’s first love poet Sappho, based on the little we know of her from the surviving ‘fragments’ of her work.

“It looks at this woman who has been deconstructed by all these different people and put back together in a way that makes her completely unrecognisable,” Ruano explains.

“The idea is to give [Sappho] her own voice and most of the play uses her own words – her own poetry. It’s all drawn from her work.”

This dissection of the infamous seventh century figure runs alongside a modern day retelling of her intense love affair with Atthis – a young woman who dominates the lyricist’s poetry.

“If you look at Ancient Greek times, the idea of men loving men and women loving women was so natural,” Ruano says. “It was an important part of a woman’s development to be intimate with a woman.

“Back in those times, men were considered beautiful…women weren’t considered as attractive and Sappho highlighted women’s beauty in her writing.”

Taking on the demanding and complex role of Sappho in the one woman show is the husky-voiced and statuesque Victoria Grove, who also starred in Second Skin’s award-winning production of La Chunga in 2012.

On working with Grove, the first-time director for Second Skin is extremely positive: “She’s just so lovely to work with. She’s really creative and inventive.”

Over the course of our conversation, Ruano reveals that the production – in an intimate setting with room for just 20 audience members – will be “very beautiful” and involve Grove being suspended in the air for sections of the play, to reflect “things being out of reach and the poets being out of reach… not being able to access something that’s not there”.

When asked why people need to see it, Ruano says: “I could say something terrible boring like Sappho is incredibly influential and important and you should know her work, but frankly it’s going be a really sexy show.

If Ruano’s enthusiasm is anything to go by, it is sure to be something very special.