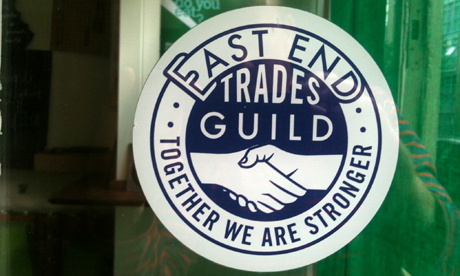 The cooperative, which is based on the medieval idea of a city guild, formed last month with the aim of safeguarding small businesses from the threat posed by large retail chains, gentrification and soaring property prices in East London.

Their long-term aims are to establish rent review workshops, to trade with one another and to build relationships with developers and local authorities.

Organiser Krissie Nicolson said that small independent businesses are “what give colour, light and character to our streets. When they’re gone, they’re gone.”

The guild came about as a result of the success of Paul Gardener, the fourth generation of his family to run Gardners Market Sundriesmen, to prevent his business from being priced out of the property market two years ago.

The paper bag supplier, which claims to be the oldest business in Spitalfields and has been based on Commercial Street for more than 140 years, was faced with an increase in rent from £15,000 to £25,000.

It was an increase that the suppliers were unable to afford and seemed likely to spell the end of the family business.

Through support drummed up by the Spitalfields Life blog, Gardners was offered advice that led to the renegotiation of the rent to a staged increase.

Nicolson said: “Anecdotally, we believe even many of the multiples can’t support these costs. We can see the result in empty units, but landlords prefer to leave them empty, in the hope of lucrative new tenants, than keep traditional businesses going.

“It’s been a long struggle, but maybe now the tide is turning. We hope other areas will look at what we’re doing, and believe that for small independents, decline and closure is not an inexorable process.”

Bearing the motto “together we are stronger”, the logo for the guild was designed by James Brown, a Hackney-based illustrator and print-maker, who also designed a print to celebrate Gardners earlier this year.

Brown said of the logo: “It’s probably one of the pieces of work I’m most proud of, it’s really nice to see the stickers in one of the windows, I smile every time I see one. I was honoured to be asked to do it.”