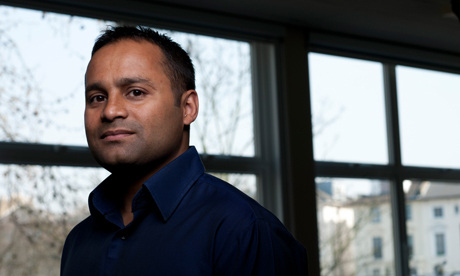 “I feel like a rock star,” jokes my interviewee, as we enter the green room at the Hackney Attic. While he certainly has something of the rock star about him, Alom Shaha is in fact a physics teacher and a writer (although in a post-Brian Cox culture this may be a fine distinction). He’s also probably the most famous Bangladeshi atheist in Britain, featuring on a recent cover of New Humanist magazine and being praised by the likes of A C Grayling.

It was talks with his students that made Mr Shaha want to write a book about atheism for the young. The result, The Young Atheist’s Handbook, is a very personal account of the experiences that shaped the author’s ideas about religion and God.

“It’s not an anti-religion book, it’s a pro-atheist book,” he tells me. Having set about writing a handbook to introduce young readers to the arguments about God and religion, Mr Shaha found that storytelling was more interesting than “just laying out facts” or rehearsing old arguments.

He says “storytelling is a fundamental human need,” and that he has written a far more powerful book by “making it personal.”

The book describes Mr Shaha’s life growing up in a Bangladeshi Muslim community in South East London, and explores how the death of his mother when he was thirteen left him unable to believe in a loving God.

“The experiences we have shape us. We can and we should think about why we believe what we believe,” he says. This is part of why he doesn’t like atheists who think religious people are stupid. Such an attitude is “dismissive of huge swathes of people,” he says, and neglects the partly rational reasons people believe as they do. “Losing religion for most people is not intellectual, it’s an emotional response,” he adds.

He says his approach is to say, “this is why I believe what I believe,” rather than tell people they are wrong or foolish. It is this ability to empathise with religious believers that marks Mr Shaha out as such a fine ambassador for his cause: he understands the human needs that drive religious faith.

He also counts Christians and Muslims among his closest friends, and jokes that he has more in common with religious people than with supporters of the Conservative party.

Mention of that august institution brings me along nicely to the book’s second great virtue. Mr Shaha once wrote that, “the atheist and sceptic movements are dominated by white men,” (not meaning this to be taken as a compliment), and spoke more about this at my invitation.

He believes that, “lack of belief in God is universal, and it needs to be seen as universal.” He calls on non-white atheists to speak up, “so it’s not considered controversial that black, Asian, or Latino people” are non-believers.

“Young people would feel able to be honest and they wouldn’t feel like they’re betraying their ‘race’ or betraying their ‘culture’,” he continues. He tells me it is crucial that “more people like [him] come forward and say, ‘I’m an atheist’” and that there is an increased ‘visibility’ of people who “don’t believe what their parents believe.”

Mr Shaha says what he hopes for is a “reformation of religions so they are in line with secular twentieth century thought, and don’t try to influence society,” and a world where religion would be “more about the personal than political.” The alternative, he holds, is a world where the intolerant have the whip hand: “and that’s a world I don’t want to live in.”

“All should be entitled to be true to our sense of self. If you can’t then in a very real sense you are oppressed.”

The Young Atheist’s Handbook by Alom Shaha is published by Biteback.