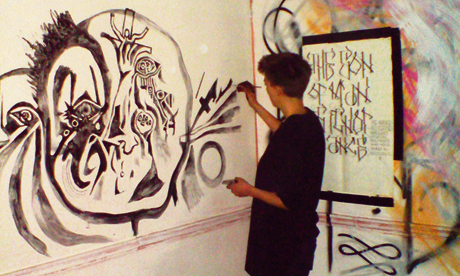 Home is where the art is: squatters’ exhibition sets up in commercial premises

However, as the new legislation – which carries sentences of up to six months in jail and maximum fines of £5,000 – only applies to residential premises, squatters are now making commercial properties their main priority.

Tania Rose, a Hackney squatter for over three years, said that in the wake of the first prosecutions “squatters in residential properties when the law was enacted have decided to move on.”

Ms Rose, who is also an activist on behalf of people facing eviction, described relations between squatters and Hackney Council as “all hostile – if you’re in a council property they’re going to serve you with legal proceedings.”

A spokesperson for Hackney Council told the Hackney Citizen it is too early to say whether the new legislation is having any impact but pointed out 1,535 households in the borough were classed as statutorily homeless – ie those with a roof over their heads but who are still threatened with the loss of their current accommodation.

With waiting lists for housing numbering over 12,000 (according to lettings website Hackney Choice), the council plans to tackle the issue of homelessness by providing 2,000 homes over the next decade, as well as offering assistance for owners wanting to bring their empty properties back in to use.

However, the current demand by squatters for commercial spaces brings its own problems, according to Ms Rose.

“It’s getting to the point where we have a squat that’s open to 15 that now has 40, and overcrowding is becoming a health issue. Often the commercial buildings don’t have washing facilities – if you get a flushing toilet you’re lucky and there’s certainly no shower.

“People say ‘Look, they’re just criminals, lawless criminals’, but it’s not about that, it’s about supporting each other and a right to a home.”

Conservative MP for Hove and so-called ‘architect of the squat ban’, Mike Weatherley, said the fact that squatters have moved to commercial properties means people will be “screaming out” for that law to be changed as well.

He replied to Ms Rose’s claims by saying: “I have to give hats off to the squatters, they have an excellent PR machine that spreads all these sort of things that people want to believe but that are completely untrue when you actually test it out.

“If there is suddenly overcrowding in other squats as a result of [the law] then I’d like to know specifics, and I’d also like to know why they are there squatting rather than going through the local council.”

According to figures from the Empty Homes Agency, an independent charity, there are 3,180 empty homes in Hackney with over two thirds of those listed as privately owned with many of them standing vacant for six months or longer.

Among the 14 inner London boroughs, Hackney has the highest rate of empty homes at 3.1 per cent. A Freedom of Information request to Hackney Council in 2010 showed a total of 1,248 empty commercial properties at the time.

However, Mr Weatherley does not see why the number of empty homes should justify squatting, and claims there are many reasons why properties lay idle which squatters “can’t possibly know the reasons for.”

He said: “If something is wrong in a society you don’t just go and break the law and help yourself to it. Before, there was no repercussion for those anarchistic behaviours and now there is some retribution available under law, and most residential people feel this is a good law.”

The Metropolitan Police Service said in a statement that the new legislation “sought to protect the vulnerable, in terms of the harm caused to home owners but also to take full account of the systems that are in place to provide support for the homeless.”

Hackney squatter Adrian ‘Litro’ Serrano, who is helping run the four-day Temporary Autonomous Art exhibition from his commercial squat off Hackney Road, said locals told him the building he currently lives in was empty for 25 years.

He insisted: “We’re not stealing anything. It’s just a place to live because they weren’t using it. These people have a lot of money, a lot of places. What is the purpose of having a place and never using it?”

According to Jenny Simon – also attending the show and herself a squatter for over 10 years – the new law will fail because the “hard-core, hard line squatters who can see a derelict monstrosity like this and see potential in it” will always find ways to circumnavigate legislation.

“It’s dank and it’s dirty, and it’s got rising damp and there’s asbestos in the roof, but ultimately people have been forced into finding places like this,” she said.

The Advisory Service for Squatters (ASS) is a long-established, volunteer-run organisation, based in Whitechapel. Michael Dixon, who works with the group said: “Homelessness is not going to go away and empty properties, particularly in Hackney, continue to be left empty and neglected and so long as those two things are going to happen, squatting is going to happen.”

Mr Dixon described being homeless as not about sleeping rough, but rather “it is about being in a position of losing any place to sleep”.

He said squatters were not “just some homogenous group” and although many were squatting as a last resort, there were also many people squatting as a way of life that didn’t involve the ‘rent treadmill’.

Former squatter and Hackney street artist, Stik, said living in squats alongside people who were creating artistically was how he became an artist himself. Speaking about the legislation, he said: “I don’t know any residential squats in Hackney anymore as a result – it’s literally just killed a whole scene.”

Mike Nicholas, who works with the Thames Reach homeless charity, said there were issues regarding refuse and sanitation in squats, as well dangers to do with fires and discarded syringes.

He said: “We don’t want people who are squatting to be criminalised, we want to find some form of housing solution for them. But we also recognise the need to close these squats down because often they’re in dangerous premises, and they present a threat not just to the people living there but they can also cause problems for the local communities.

“Squatting tends to be either romanticised or demonised but often what we find is quite different from the way it’s being portrayed.”

Some names have been changed.