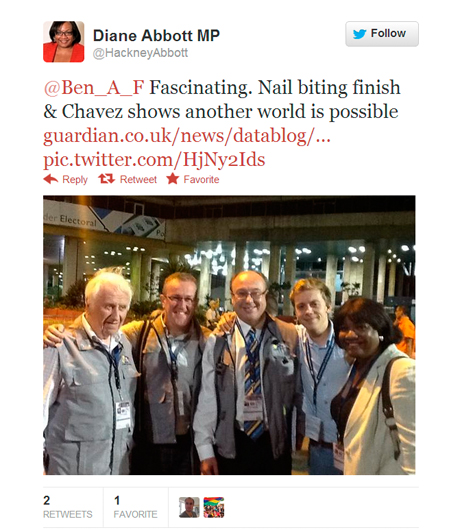 Diane Abbott skipped a local NHS meeting to fly to Venezuela last month where her praise for Hugo Chavez has angered critics of his regime.

They say her remarks are ‘a slap in the face’ for the country’s democrats who live under a regime denounced by human rights groups for its repression of dissent.

The Hackney MP flew to Venezuela in early October to observe the country’s presidential election after cancelling a speech at a local ‘Keep Our NHS Public’ meeting at short notice. When asked on Twitter why she had missed the meeting, Ms Abbott, who is also Shadow Minister for Public Health, said: “I was election observer for presidential election in Venezuela. Vital election for Latin America and the Caribbean.”

@crablin Pr I was election observer for presidential election in Venezuela.Vital election for Latin America and the Caribbean

But it was Ms Abbott’s tweets about the election itself and the regime of Hugo Chavez that have provoked the ire of Venezuelan bloggers. In several tweets Ms Abbott praised the election process in Venezuela and compared it favourably with that of the UK: “It was a free election, a peaceful election & far less susceptible to fraud & impersonation than the UK process.”

@peterkenyon It was a free election, a peaceful election & far less susceptible to fraud & impersonation than the UK process.

In another tweet the Hackney MP defended the level of press freedom in the country, saying there was “plenty of anti-Chavez stuff on TV and in the newspapers.” Ms Abbott also wrote an article online in which she praised the Chavez government’s record in office and described his re-election as a ‘victory’ for the poor of Venezuela.

@charlesmaggs Actually there is plenty of anti-Chavez stuff on TV and in the newspapers. As you would know if you were here.

Her remarks were rejected as ‘misguided’ and ‘misinformed’ by Venezuelans critical of the government.

Speaking to the Hackney Citizen, popular blogger Miguel Octavio said: “either your local MP did not pay much attention or she was not shown the full truth.”

Mr Octavio said that election observers were “selectively chosen among the friends of the Chavez government,” and that critical observers were kept out.

He also said there were irregular practices and abuses of power during the election, including the use of government resources to promote the ruling party. “I certainly believe that in the United Kingdom, such abuses would not be tolerated,” he said.

Mr Octavio also rejected Ms Abbott’s claims about press freedom, saying, “There is no freedom of the press in Venezuela, as your MP claims.” “There are political prisoners in Venezuela, most of which have been jailed under direct orders from Hugo Chavez. Yes, some people are allowed to criticize the government, but reporters have had their programs in the radio and TV cancelled just because they oppose the government,” he said.

“Having anyone from Great Britain superficially come to Venezuela and praise Chavez’s achievements is a slap in the face for those people who fight for human rights and the freedom of all Venezuelans.”

Daniel Duquenal, editor of Venezuela News and Views, was also critical of Ms Abbott’s trip: “From what I could read from Dianne Abbott, she came to Venezuela as a political tourist, to see what she wanted to see and hear what she wanted to hear. As such her comments and opinions are merely hers, representing her wishful thinking, a holiday away from objectivity.”

“The October 7 elections of Venezuela were neither free nor fair. When Ms Abbott’s integrity comes back from vacation she will be able to find the necessary information to understand the reality of Venezuela and loosen up her blinders,” he said.

Mr Duquenal, who has also written for Index on Censorship, said that Ms Abbott’s constituents in Hackney should take note, saying: “The only thing I can tell them is that anyone praising Chavez has dubious democratic credentials.”

Diane Abbott MP was not part of a formal observation mission organised by an international body, it has emerged, but was invited to be an observer as part of the Venezuelan government’s observation regime.

No international monitoring bodies went to Venezuela to observe the elections as they have done in previous years.

When asked about this in an online forum, Ms Abbott said: “I was pleased to be an election observer for the Venezuelan elections. My family originate from the Caribbean and I knew that these were very important elections for Latin America and the Caribbean. The region also has an ugly history of American intervention. So anything I could do to make sure these elections were not just free and fair, but seen to be so, I was glad to do.”

Ms Abbott, who is a patron of the pro-Chavez group Venezuela Solidarity, also conceded that she was not a neutral observer, saying: “It is not normally assumed that you have to be ‘neutral’ to be an effective election observer.

“Most people who were observers at the 1994 South African election were not ‘neutral’ between Mandela and Buthelezi. In fact most of us were long-term ANC supporters. The point was that we all took our duties seriously and prepared to be scrupulous and fair,” she said.

Professor Sarah Birch of the University of Essex, who is an expert on electoral malpractice, said: “It is difficult to see how a handful of individuals visiting Venezuela for a short time would be in a position to evaluate the electoral process in its entirety.

She added: “Elections are complex events that unfold over a number of months, and their integrity can be undermined in a wide variety of ways, many of which are not evident to observers visiting polling stations.”

Chav’z: The Demonization of the Ruling Class?

Writer Owen Jones has written that Hugo Chavez is the victim of unfair media coverage, prompting suggestions that he could write a sequel to his best selling book. The Hackney resident and author of Chavs: The Demonization of the Working Class joined Diane Abbott MP in observing the Venezuelan elections, and wrote that Mr Chavez leads “a popular, progressive government that breaks with the neo-liberal dogma.”

“The reality of Venezuela could not be more distant from the coverage, but the damage is done: even many on the left regard Chavez as beyond the pale,” wrote Mr Jones. “Those who challenge the narrative are dismissed as ‘useful idiots’, following in the footsteps of the likes of Beatrice and Sidney Webb who, in the 1930s, lauded Stalin’s Russia, oblivious to the real horrors.”

He concluded: “Despite formidable obstacles, he has proved it is possible to lead a popular, progressive government that breaks with neo-liberal dogma. Under Chavez, the poor have become a political power that cannot be ignored.”

Mr Jones’s article was criticized by his fellow Independent Voices writer, James Bloodworth, who accused him of “political naiveté.” Speaking to the Hackney Citizen, Mr Bloodworth also criticized Diane Abbott MP, saying: “That western politicians and radicals should look abroad for a revolution they can support is nothing new of course. The same thing happened when Hugo Chavez’s main ally in the region, Fidel Castro, took power half a century ago. And every time history repeats itself the same political naiveté is there.”

“Did Ms Abbott make any attempt to contact the journalists publicly accused of terrorism for speaking out about abuses of power? Did any of the delegation of ‘progressives’ who travelled to Venezuela to ‘oversee’ the election process bother to make contact with Rubén González, the trade unionist jailed for going on strike?”