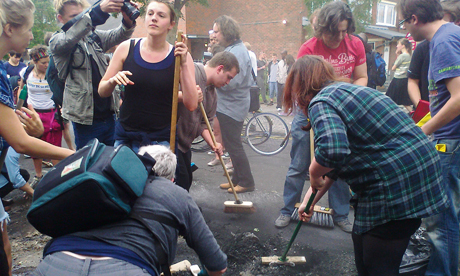 Aftermath: volunteers get together for the Clarence Road clean-up. Photograph: Jessica Smith

An aggressive clatter of helicopters overhead, the smell of burning vehicles and dark smoke haze unnerved Hackney residents on the evening of Monday 8 August 2011 as Clarence Road erupted.

Sparked by community anger at the fatal police shooting of Mark Duggan on 4 August in Tottenham, disturbances had spread over the weekend to Edmonton, Enfield, Wood Green and Brixton.

On the morning of 8 August, Hackney waited expectantly. Reports on Twitter and Blackberry messenger had already suggested that Hackney would be next. By 1pm many of the shops on Mare Street had closed. By 4pm, Hackney Council staff had been sent home.

Looting began on Mare Street at about 4.30pm and stand-off ensued between rioters and police. Hackney’s main street was closed and trains were not stopping at Hackney Central.

Police moved crowds on from Mare Street and London Fields and Clarence Road became the centre of events. It was here, in the Pembury Estate, that for several hours lawlessness took hold. Cars were stolen and set on fire, roadblocks were set up. Rioters pelted police with bricks and makeshift weapons.

Despite political attempts to dismiss the riots as ‘pure criminality’ studies have shown deeper social causes.

The in-depth Reading the Riots study conducted by the Guardian newspaper and the London School of Economics showed that in Hackney the police were direct targets.

Paul Lewis, who headed the Guardian’s coverage of the riots, said that the relationship between the community and the police and the use of stop-and-search was significant: “That was a significant driver behind what happened and why many came out to the streets, particularly in some areas,” he said.

“You really got that sentiment in Hackney more than anywhere else that there was this mutual animosity between a sector of the community and the police…When we interviewed police officers some of them actually concurred.”

An Ipsos-MORI report, commissioned by Hackney CVS, also pointed to anger with the police as a burning cause of the Hackney riots.

It was not the only factor. The interviews with 2000 Hackney residents showed a complex mix of frustration and anger at the growing divide between rich and poor, rising rents, unemployment, government cuts, particularly to students’ Education Maintenance Allowance and a sense that the government wasn’t listening to communities.

To anyone who was in Brixton in 1981, the conditions surrounding the riots in 2011 would sound very familiar. In an unprecedented outbreak of violence, rioters set vehicles alight, attacked buildings and fought police for three days in April, leaving more than 300 people injured. Similar outbreaks of violence occurred in other cities over summer, including the Toxteth riots in Liverpool in July.

Many young black men felt discriminated against because of what were known as the ‘sus’ laws, or offence of ‘suspicious person loitering’ that were used for stop-and-search, and these were considered to have been a major contributing factor in the Brixton riots.

“If you go back to the riots in the 1980s and read the Scarman Report and look at what was happening in Brixton the complaints weren’t that dissimilar,” Paul Lewis said.

Young people who gathered at an event on 12 August 2011, organised in response to the London riots, had similar feelings:

“People are trying to get back at the police because of the way we’re being treated. Everybody here’s been pissed off about the police at least once,” said one young man.

“If I’m getting stopped and searched every day with no reason, just for once I’d want to give them a reason.”

In Hackney, the community response in the aftermath of the riots was heartening.

By 10am Tuesday morning streets had been cleaned, broken shop windows boarded up and a sense of order mostly restored. Hundreds of people showed up to Clarence Road armed with brooms and bin bags to lend a hand to the cleanup effort.

Local shopkeeper Siva Kandiah’s Clarence Convenience Store had been ransacked and his story captured the hearts of the community. Donations flowed in and the shop reopened on Friday 19 August. The online campaign had collected more than £30,000 by 30 August.

Hackney Police recognise the tensions and are working with community groups to improve relationships, particularly around the use of stop-and-search.

The full interview with Guardian journalist Paul Lewis features at the Freedom exhibition at Art Against Knives, BOXPARK, Shoreditch from 9 August to mark the anniversary of the riots.

← Ted – reviewIn for a pound – why Hackney needs its own currency →