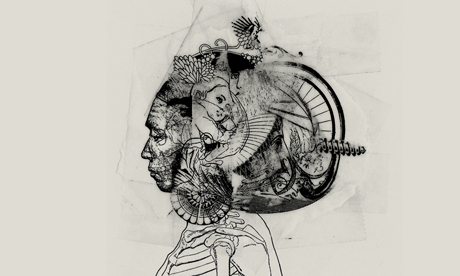 Confession in Water, a multimedia exhibition, showcases Lau’s wide range of creative skills from digital collages, print and illustration to film and bookmaking.

Since graduating with an MA in Book Arts from Camberwell College of Arts in 2010, Lau has taken part in group exhibitions, focusing on his innate need to create art, though not to necessarily “become an artist.”

And for his first solo show, this philosophy prevails. He uses art as a tool to express deep, dark preoccupations of the human mind that are often kept secret. It is not fame and celebrity that interest him but the creation of intellectual artworks that people can relate to.

“If people can see a reflection of themselves in my work,” he says, “and it alters their state of awareness, I couldn’t be happier.”

The title of the exhibition came from a quote by Albert Camus: “A guilty conscience needs to confess. A work of art is a confession.” Lau is concerned that confessions are often used to simply relieve oneself of guilt.

“It should go deeper than that,” he says. “It is a confession of one’s weaknesses, vulnerabilities, lacks and limits.

But Lau is also keen to point out that there is nothing negative about the process of confession. “If you don’t dig up your weaknesses to confront them, you won’t become stronger,” he believes.

All of the works that make up Confession in Water are visual representations of the psyche. In his short film 体 (Body), Lau explains that the protagonist is a narcissistic man who is struggling in clay. This is intended to reflect our “body modification mania,” says Lau, “things like face lifts, bodybuilding, plastic surgery.”