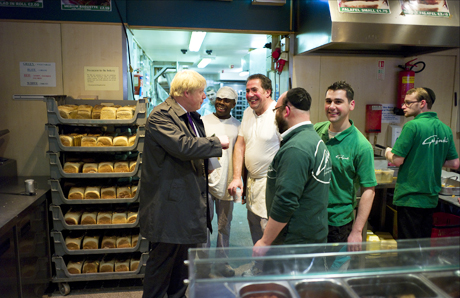 Boris Johnson visited Stamford Hill as part of his re-election campaign for Mayor of London, a few weeks ahead of the vote on Thursday 3 May.

Mr Johnson spoke with local residents and supporters across the Broadway, and made stops at Grodzinski’s bakery, the Omarka Polish shop and several religious institutions, attracting flurries of local interest along the way.

He was joined on the day (Thursday 5 April) by an entourage of Conservative party councillors, press, and members of the town’s Orthodox Jewish community, who joked about the “Messianic” nature of his reception.

Upon arriving at Jewish Care’s Brenner Community Centre, Mr Johnson spoke to a room full of elderly citizens, pledging that if re-elected he would provide a 24 hour Freedom Pass to anyone over the age of 60.

He also promised to oppose the “narrowing of Seven Sisters Road”, and said his team would “do everything in our power to make sure the 73 bus returns.”

Boris Johnson’s visit to Stamford Hill brought with it his usual dose of comedy.

When at the Orthodox Union the Mayor was presented with a purple calendar by “the representatives of 70 Jewish institutions”, one of the onlookers drew attention to how it perfectly matched Mr Johnson’s tie.

“In our religion”, the man said, “we do not believe in coincidences.” Mr Johnson replied: “If I have some sort of rabbinical endorsement, I feel much fortified in my campaign.”

But Mr Johnson was also careful to include campaign talking points when speaking to local residents, particularly on transport and policing. He promised to “protect investment in transport in this city”, “keep cutting crime”, “keep putting more police on the street” and “keep cutting council tax”.

A journey on his battle bus brought Mr Johnson to the Kwick Fit Gym, which is frequented by Orthodox Jews. “This is the kosher gym?” he said to one of his team, “Fantastic.”

Mr Johnson was soon donning boxing gloves, and proceeded to spar with the owner of the gym, to the amusement of the crowd.

Asked what he thought of Boris Johnson’s performance, the owner replied: “Not bad – he can improve.”

Does he have the right instinct for the campaign? “Absolutely!” he said, “I hope he wins.”