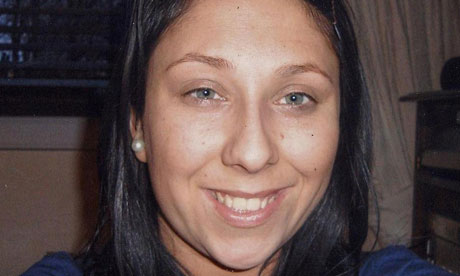 This article titled “Body found in canal is EastEnders actor Gemma McCluskie” was written by Matthew Taylor, for The Guardian on Friday 9th March 2012 18.42 UTC

Police say a headless torso found dumped in a London canal is that of the missing former EastEnders actor Gemma McCluskie.

Her remains were found in Regent’s canal in Hackney, east London, on Tuesday. Detectives believe she was murdered after attending the opening of the Royal London hospital in nearby Whitechapel. A 35-year-old man has been arrested.

Detective Superintendent Fiona Mallon, who is leading the investigation, said: “It is important that we piece together Gemma’s movements from Wednesday 29 February until the discovery in Regent’s canal in Hackney on Tuesday.

“We also urge anyone with any significant information about this case to contact us as soon as possible. In particular we would like to hear from anyone who may have seen any suspicious activity around her home address in Pelter Street in Bethnal Green.”

The 29-year-old’s disappearance was reported to police two days after she went missing. Her torso was found close to Broadway Market in Hackney after being spotted by a member of the public.

The discovery came after officers had expressed concern for McCluskie’s welfare and searches were organised by her cousins Kyri Sambridge and Nikki Tsindides, with missing person posters put up across London’s East End. Friends handed out leaflets and McCluskie’s former EastEnders co-stars Natalie Cassidy and Brooke Kinsella appealed on Twitter for help in finding her.

Postmortem examinations have so far failed to determine a cause of death. Tributes, flowers and candles from McCluskie’s friends and family marked the spot where her remains were found with messages expressing shock and sadness. Police divers continued to search the canal on Friday and detectives cordoned off McCluskie’s Bethnal Green maisonette as forensic teams carried out detailed searches.

Police said McCluskie had been pictured at the hospital event wearing a yellow long-sleeved blouse with a round neck and navy leggings. She was carrying a two-tone Louis Vuitton bag with beige handles. Her BlackBerry mobile phone and its white case have not been recovered. Police are releasing images of McCluskie in the Whitechapel area in the runup to her death in the hope that witnesses will come forward.

A spokesman for the Metropolitan police said: “Officers are now keen to trace Gemma McCluskie’s last-known movements before her murder. They are aware that she attended the opening of the new Royal London hospital in Whitechapel on Thursday 1 March at 11.30.”

The spokesman added that a 35-year-old man remained in police custody.

“A magistrate has issued a warrant granting further time to question the man,” he said.