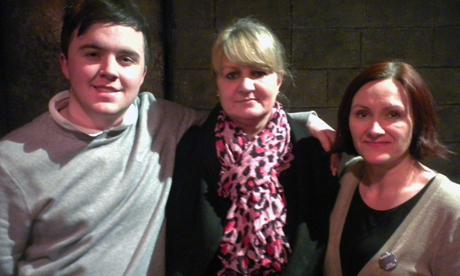 Anyone who has experienced any aspect of the criminal justice system will testify that it is hard.

Courtrooms leave you feeling calloused and trials wear you down, and even those prisons said to be the ‘nicer’ ones seem to tear at the soul.

What is also obvious to anyone who has had dealings with this system is that, despite the vital role it plays in our society, it is imperfect and grossly under resourced.

Miscarriages of justice happen, but the fight to clear one’s name is a mammoth task.

For the past seven years it is a battle that has been fought by Sam Hallam, the Hackney man who was tried and convicted of murder aged 17, and his family and supporters from his area of Hoxton.

The battle has taken its toll, but there has slowly been progress.

In May an appeal will be heard in the High Court that could lead to Sam’s conviction being quashed.

The former kitchen fitter, now officially known as Prisoner MW5897, was found guilty following a terrible and lethal attack by a gang of youths on Ethiopian refugee and trainee chef Essayas Kassahun.

There was no CCTV or forensic evidence linking Sam to the crime, and he was convicted solely on the basis of shaky evidence provided by two eyewitnesses; one retracted his accusation in court, the other said that when she accused Sam she had been looking for “someone to blame”.

Sam has said he will never admit to a crime he maintains he did not commit, even though doing so might increase his chance of being eligible for parole.

That, in summary, is the story. A mind-boggling number of words have been written about it in newspapers, and TV programmes have been made. Now this ‘verbatim’ play, based on documentary evidence, has been produced.

Theatre can be a more powerful medium than the two mentioned above, and it is bold to make a journalistic play out of a ‘live’ story like Sam’s.

Brave too are the prisoner’s family, some of whom were in the audience for the show’s first night.

It must have been a strange experience for Sam’s mum Wendy to see herself played by actor Debra Baker.

Having met some of the characters in real life, I can confirm that, whether due to inspired casting, great acting or both, the likenesses are uncanny.

Murder trials, if nothing else, make for good theatre, and with its tense court scenes and well conveyed dialogue, Someone To Blame is engaging even to those wearily familiar with the events it depicts – a testament to the skill of playwright Tess Berry-Hart.

Knockout performances were given by ensemble actor Vincent Jerome and Robin Crouch, who plays Sam.

Graffiti and cold prison walls comprise the set, which complements the mood, and the work teases out broader themes about wrongs done by rumours, failings at the heart of big authorities and the helplessness of those at the mercy of the legal process but without the connections that can be called upon by wealthier defendants.

When I met Sam Hallam in HMP Bullingdon in 2009, four years after he was jailed for life, he still seemed stunned by what had befallen him. “The system’s rubbish,” he said when I asked how he explained it.

This cracking and well produced play will help keep his case in the public consciousness in a way that yet another newspaper article cannot. Highly recommended.