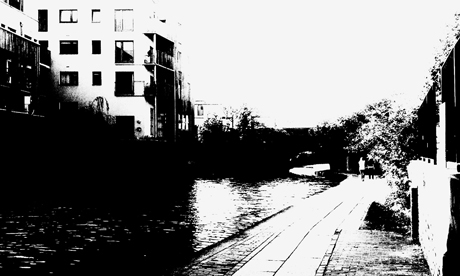 Acquired For Development By… A Hackney Anthology is edited by Gary Budden and Kit Caless.

It began just after the bombs.

A shared house of post-graduates on Manor Road. The eccentric Chinese landlord would stroll in unannounced on New Years day to do some unneeded repairs. In retrospect, he was one of the good ones. An exploding extractor fan and a charred bathroom ceiling taught me that. The garden backed onto Abney Cemetery, and older tenants would tell tales of cottagers they’d spied in clandestine embraces, mossy condoms as evidence. Little Jewish girls would wave to us from next door’s upstairs window as we sat around bonfires or sat smoking and drinking late into the night.

I worked, in between shifts in a bookshop, on a dissertation about Derek Jarman and psychogeographic film. I’d obsess over The Last of England, Patrick Keiller’s London and Andrew Kotting’s Gallivant. I was confronted with the notion of ‘occult capitalism’ for the first time. I was listening to a lot of Crass and Conflict.

Pieces began to fall into place. For so long the world had seemed something that had happened to other people; that’s what the easy lies of the television had softly murmured into indifferent ears during my formative years. “Things don’t happen in England anymore; irony absolves us. You’re already dead.”

This notion was being shredded, scuppered and run aground. The talk of the paranoid psychogeographers, the Crass lyrics, a city shaded by the recent bombings and the Menezes shooting, the weight of so much information, all made a mockery of the irony-impulse and the idea that life was a spectator sport.

Psychogeography, inevitably, led me to London Orbital, the works of Iain Sinclair and a whole new world right on my doorstep. Place, as a concept, hadn’t mattered to me much then. I was, like so many, still more knowledgeable about the movements and people across the Atlantic than in my own postcode. Happily, that was soon to end.

I had to relearn the history and the meaning of my own country, and I did that in Hackney. I guess it could have been anywhere. But I did it here.

The first page of London Orbital spoke of the Lea Valley, where I ended up living, and Whitstable, the town of my childhood. It couldn’t be fate, but it was close enough.

I look at the fate of that seaside town and I compare it to Stoke Newington. They are oddly similar. Run down and the home of counter-culture residuals in the 1980s and 90s, then a new influx into the area bringing olive vendors, organic produce and increasing attempts by large corporations to cash in on the interest the area had generated.

Sometimes, what makes a place desirable kills it.

I’d heard talk, via Sinclair, of Alexander Baron. In vain I tracked his novels; ever the completist I wished to own, not to loan, but loan I did, from the libraries now threatened with closure. Had they been absent I would never have read the first edition of The Lowlife. My eyes opened that bit wider, the streets seemed more solid and my world was somehow fortified. People like me, like us, had been here for a long time. One line still stays with me. Indirectly it led to the creation of this text you are now reading.

If ever there was a more fitting statement to describe what I was seeing, feeling, not just in Hackney but across the whole country, then I could not find one.

I’d been here so long that, yes, this was where I could now observe the very real effects of endless redevelopment taking place. But I only needed to go home, visit my mother, to see the same thing happening to high streets in small towns across the UK. Blink and you miss another Costa Coffee arriving fully formed. You never wanted it. But there it is.

Only in my late twenties, a world that I could remember seemed to be disappearing. Even the diversity of shops and businesses, surely OK in a capitalist world that promotes economic competition, seemed to be disappearing. The limited choices we had dwindling all the time as they were taken over by and throttled by conglomerates, chain supermarkets, the unfeeling indifference of property developers.

Development and progress, if handled sensitively, are clearly good and positive things. Yet all I see is an urban topography in constant turmoil, a concerted attempt to erase collective histories, to scrub the slate clean and force us to question our own memories.

If I cannot find any official documentation rubber stamping my past, the places I visited and the things I did, then did they really happen?

My memories are becoming opaque, betraying me. They are being taken from me and handed back deemed worthless. Unofficial. Bootlegged reminiscences only for the cult collector.

What this book contains are some small acts of reclamation. An attempt to say what we think before we forget.

Acquired For Development By… A Hackney Anthology is edited by Garry Budden and Kit Caless and published by Influx Press. It goes on sale this month and you can buy it in Hackney bookshops and on the Influx Press website at influxpress.com.