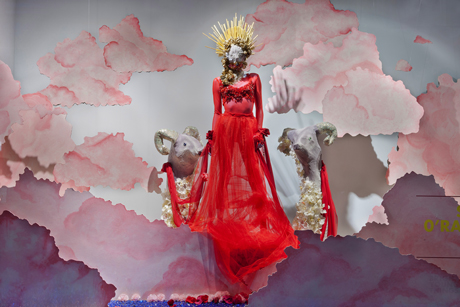 Contorted mannequins, baroque-style candyfloss-coloured clouds and horsetail umbrellas have turned the giant street level windows of Selfridges’ flagship store into what feels like a set of surreal film stills.

This is thanks to a handful of exciting new designers from the world of art, design and predominantly fashion. Bright Young Things is an initiative set up by Selfridges and now in its second year, which showcases UK-based emerging talent.

At the beginning of January, fifteen designers were given a window each, to do with as they pleased, the sole aim being to communicate the essence of their work. The result is a menagerie of dream-like scenarios behind glistening glass.

Garments and products featured are available to buy from a number of pop-up shops in store, offering something tangible as well as visual, and providing these fledgling designers with a fantastic commercial and PR opportunity.

The Dutch designer’s window was strewn with contorted mint and lilac shaded mannequins clad in Hawaiian print and frilly seamed trousers. Set to be a key trend of the summer, van der Horst’s sugary sweet palette and tropical print offers a warm optimism to the weather-bearing passersby.

Hackney-based womenswear designer Adam Andrascik’s collection, flawlessly communicated through his window display, should be given merit for its simplicity.

A backdrop of stark white floor length rolls of paper were torn away to reveal mannequins sporting ripped and layered sleeveless shirts and shift dresses in a colour clash of powder blue, pink-beige hues and black.

Andrascik’s layers of smoothly torn tails and undergarments create interesting silhouettes that were emphasised on display by light bulbs lodged in the mannequins’ stomachs.

The designer played with the fragility and versatility of his unusual choice of fabrics, which included a combination of wool crepe and polished cotton, by bonding together oversized pieces of fabric and then slashing the garments apart again.

The shadow play created by the vast lengths of paper as a backdrop, cleverly reflected Andrascik’s use of graphic lines and lightning strikes. His is a contemporary take on SS12’s key trends.

O’Raghallaigh, based in Hackney Wick and who shot to recognition when Lady Gaga wore one of her ensembles on British TV last year, draws inspiration from religious iconography, mythology and fairytale.

There is something of a romantic nod to the past in her collection, whilst a palette of clashing reds and fuchsia offer a contemporary twist. O’Raghallaigh’s pink lace collars and chiffon skirts, alongside pieces by all the designers featured, are on sale in store.

From a commercial perspective, this offers new designers a realistic opportunity to sell their clothes in the west-end, to the sort of people who can afford it. Creatively and in terms of the industry, it has attracted international press and last year every designer involved went on to expand and progress with their own brand.

It is not surprising however, that most of this talent is cultivated in East London, where studio space is just about affordable and the area’s cultural diversity and street style makes for great inspiration.

The dominance of menswear designers in this year’s batch of Bright Young Things was indication of the forms serious progression within British fashion. A host of directional designers emerging from London included Astrid Anderson and Shaun Samson.

Samson, hailing from California and now based in a studio near Old Street, presented his collection of modern streetwear, inspired by Mexico and 90’s grunge music, against a backdrop of huge piñata style lettering spelling out his name- simple and effective publicity.

Traditional Mexican patterns in vibrant rainbow shades on grungy loose fit t-shirts, made for a trademark look and is set to be a SS12 trend both on and off the catwalk.

Based in Hackney’s creative studios complex Netil House, Green’s utilitarian but playful aesthetic draws on a multitude of themes from fishermen to Vikings in illustrative shirts and bold stripes.

After graduating from Central Saint Martins in 2009, Green went on to train on Saville Row, evident in his skilful tailoring and focus on cut. Featured in Fashion East’s prestigious MAN exhibitions during London Fashion Week for the last three seasons, he is set for the top.

The Bright Young Things initiative is undoubtedly a commercial venture for both Selfridges and these young designers. However, this talented group’s free reign over the vast window spaces, in one of London’s landmark commercial buildings, is an exciting collaboration between old and new and a visual manifestation of where fashion is heading next.

Bright Young Things – on display until end of February.