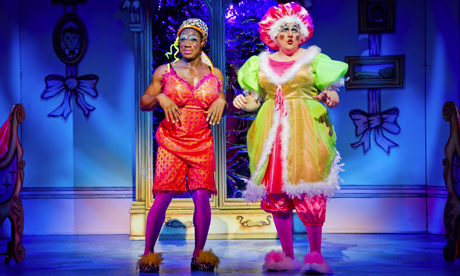 The curtain lifts at Harknee-on-Lea, the setting for this season’s fairytale, as Cinderella, played by the wonderful Sophie Ragavelas, waits outside Hardup Hall for the arrival of her new step-sisters.

On a cold grey day on Mare Street, the Hackney Empire provides an assault on the senses: an explosion of glitter, exuberance and smut awaits, as the audience settle down for pantomime season with experienced director Susie McKenna.

Regulars to the panto here may be saddened not to see veteran dame Clive Rowe flouncing around, but there are enough familiar faces to make up for his absence.

The Ugly Sisters Queeniqua and Victiqua are played with great aplomb by old favourites Kat B and Tony Whittle. At one point they drag a poor schoolteacher from the audience and proceed to torment him with a particularly horrifying rendition of Sisters Are Doin’ It For Themselves. Mr Shaw from St Mary’s was a good sport, but will probably never live it down.

Also fantastic was the deliciously wicked Countess Anastia, played by Joanna Riding, who has perfected her cackle to terrify and delight the children in the audience. Her relationship with Cinderella’s father Baron von Hardup (Peter Straker) is a highlight.

The show is peppered with references to the local area, including very funny gags about the Olympics and the Ugly Sisters posh finishing school in Islington upon Thames. There were also biting references to the world outside of Harknee, such as when Victiqua describes Cinderella as “a nasty little hoodie and I wouldn’t want to hug her”. A particular favourite was when the Prince’s mother calls her son and says “Hello News of the World, I know you are listening”.

Cinderella and Prince Charming, played by Wayne Perry, perform an endearing duet, however their love story did not hold the interest of the majority of the young audience, who began chattering while Prince Charming was singing of his sorrow.

Their focus is regained when the Ugly Sisters return to the stage, accompanied by Alexandra Burke’s ‘Bad Boys’.

The Strictly Come Dancing style dancing contest at the ball is clearly popular with the audience; when the prince’s valet Dandini (Tee Jaye), takes off Bruce Forsyth, the roof is nearly blown off with cries of “NICE TO SEE YOU, TO SEE YOU NICE”.

At two and half hours long, the performance is perhaps a bit lengthy, but the finale is fantastic. The show culminates in a high-octane chase through Leyton Forest, with plenty of slapstick before the day is saved by a wholly unconvincing pantomime horse called Clapton.

The Hackney Empire has established itself as a top destination for pantomime lovers and Cinderella does not disappoint. Older viewers will find some genuinely funny gags and children will be delighted by the buffoonery as well as the very impressive staging. The singing is also surprisingly good, especially from the main lead. Worth a view? Oh yes it is.