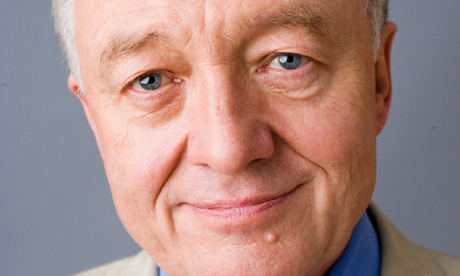 This article titled “Ken Livingstone on riots, debt and the end of the world” was written by Dave Hill, for guardian.co.uk on Wednesday 21st September 2011 14.11 UTC

Labour’s mayoral candidate arrived at Hackney’s BSix sixth form college by bus from Finsbury Park with comedian Eddie Izzard and a gang of hacks as fellow passengers. The excursion was in aid of Ken’s Fairer Fares campaign, launched today in opposition to Boris Johnson’s latest hike in the price of public transport in the capital. But the question and answer session before a full lecture hall of students was wide-ranging. Izzard played compere and Livingstone did most of the jokes, though it wasn’t exactly laughter all the way.

Asked about the riots and how he’d have handled them had been boss of City Hall, Ken pressed his familiar, catch-all charge against Boris – that he’d failed to get a grip. Rather than loitering on his hols like the present mayor, he’d have got on to the Met about officer numbers on the street, asking “how many are you mobilising?” he claimed. “By the third night they had 16,000 out and that was the end of it.”

He said that on hearing of Mark Duggan’s death, he’d have demanded to know exactly what had happened; Operation Trident, the specialist unit that investigates gun crime in black communities, had made progress down the years due to the public being assured that lives would not be taken during arrests: “That was the deal that was brokered.” In this case, he continued, “something went badly wrong.” The mayor should have found out exactly what and then provided clarity.

“People need to know the truth,” he said. “Instead, it was endless rumours. There should have been someone there [in Tottenham]. I most probably would have been there to meet the march at the police station to talk through what had happened. You can’t have a hands-off mayor in a city like this. It won’t work.”

He described Duggan’s killing as “the spark” that ignited what came next, adding that such escalations only occur, “if there’s underlying tension, despair and anger, and we’ve got that in quite a lot of parts of London. There are whole chunks of London that get written off and left behind.”

That’s why he favoured investment in jobs, he explained. “We should be building housing, building infrastructure to get people off the dole and get growth in the economy. That’s how we pay the debt down.”

He hailed Franklin D Roosevelt’s handling of the US Great Depression: “When he got elected, a quarter of all Americans were out of work. But he built the Golden Gate Bridge, the Hoover Dam, massive new motorways, housing. If you get people back to work you get them off the dole, off benefits and start them paying tax. You borrow in the short term to do that, but you then get the growth in the economy that allows you to pay it back.”

Roosevelt’s presidential broadcasts were dubbed “fireside chats,” and the sexagenarian politician’s style before his astute youthful audience took on something of the quality of the hearth. “I’ve just had my home insulated,” he revealed. “Overnight, we’re all walking around sweating. You realise how much heat was lost. There’s three million homes in London that you could insulate. That’s work for tens of thousands of people for a decade.”

Encouraging new, environmental industries in London would be a priority if he were elected, he said. The land between the Olympic Park and the Thames would be key to this. “Forty thousand homes and 50,000 jobs,” could be created there, he claimed. “You’d say to international firms, ‘Build it here and sell it in Europe.'” He was mindful too that those thrusting green tech plants would need protecting against flooding. A second Thames barrier was needed to cope with the effects of rising sea levels caused by climate change, he declared. This would have to be built, “by the middle of this century, or we’re fucked.”

And incidentally: “By the time we reach the middle of this century, in London, if we’re lucky, the temperature will be like it is in Portugal. If we’re unlucky it will be like it is in Morocco. Everything’s got to be built and re-built to cope with all that, and we’ve got to reduce our carbon emissions so we don’t just continue to make it worse.”

“A lot of people think I’m an alarmist about this,” he acknowledged, “but there’s the very real prospect – and most of the climate change scientists I talk to privately express this view – there’s a real chance that human civilisation will not survive beyond the end of this century because of the scale of climate change. So this is a huge struggle, that your generation has got to resolve a damn sight quicker than the layer of politicians who’ve just failed to resolve it, or your children will die.”

As this conclusion produced a rather sombre silence, Ken appended a note of wry levity: “So vote for me.”

That was one of the more chilling passages of the morning, but the fireside candidate compensated with a warm reminiscence about the dignity of labour. “I’ve had on average about one day a year off work,” he said. “If I can physically get out of bed, I go and work. That’s the sort of culture I was brought up in – you don’t skive, you work. Even if you haven’t got the best job in the world, there’s a sense of self-respect that comes from being able to pay your own way. Those were the working-class values that my parents gave me.”

These were quite different, he explained, from naked money-lust: “If you think that money will bring you happiness, I tell you that you’re wasting your time. Look at the respect you’ll get if you do a job that is worthwhile. Conrad Black – is he out of prison yet? He was a multimillionaire, but he knew billionaires and he wanted to be a billionaire [too]. So he stole his shareholders’ money. It’s just ridiculous.”

Moderation, self-sufficiency and saving the planet the FDR way. Should we dub him “New Deal” Ken? Will his campaign tune be “Happy Days Are Here Again”? Well, it’s worked before.