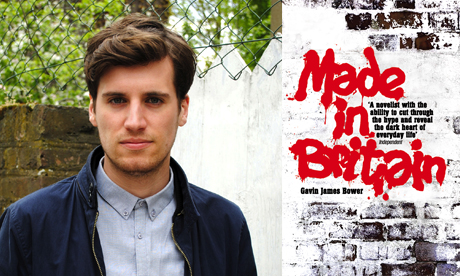 SB: Made in Britain is set in Burnley, but you live in Hackney. Many of the same problems of lack of prospects for young people affect the two places. Do you see parallels between the two? And what are the differences?

GJB: The parallels are pretty clear: both areas are characterised by disproportionately high poverty rates – one in four kids in the north-west of England, where I’m from, grows up living below the poverty line – and a strong working-class identity; both areas are home to significant numbers of immigrants; and both areas have seen trouble in the last decade, partly as a result of these factors.

Where I’m from’s a post-industrial town, an area that found its identity – an identity earned through generations of back-breaking hard work – taken away overnight with the exportation of industry abroad, the closure of mills and mines, and the loss of heavy as well as skilled manufacturing. This is a scar that’s yet to fade. You can feel it, and see the evidence everywhere you look – the crumbling terrace houses around what used to be mills just sitting there still waiting for the kind of redevelopment we’ve seen in cities (like Leeds and Manchester), which have since been gradually gentrified. Growing up in a place like that, there’s a sense of impatiently waiting for what comes next – and of betrayal.

SB: Burnley and Hackney have both been shaken by riots in recent years. Do you see a relationship between the aspirations of young people and outbreaks of violent unrest?

GJB: Out of all the towns affected by the race riots ten years ago, unprecedented in English history in terms of the number of arrests made, Burnley was the only one in which the official report pointed to drugs as the key factor – rather than a lack of social cohesion.

The most prevalent interpretation of the recent London riots was that they were spontaneous and opportunistic, which is what the report into the Burnley riots seemed to suggest; namely, that gangs had exploited a spontaneous outbreak of violence for their own short-sighted aims. I can’t stomach that. Riots like the ones we’ve seen in London, as well as those in the north a decade ago, are by their very nature irrational and unfocused – but that doesn’t preclude a rational explanation.

Similarly, while the riots in each case weren’t political, the causes very much were. Living in London as I’ve done for most of the last decade, and in Hackney over the last few years, there’s a very real sense of not only disenfranchisement but also resentment – especially among young people. That’s coupled by what Mark Fisher has called ‘reflexive impotence’ – the notion that, while young people are not apathetic, they do feel like they can’t do anything about their current situations. I think this should have us all very worried, as the new generation need to be our most optimistic citizens – and committed to making the world around them better.

SB: Your books suggest that the scars of riots live long. What do you think the legacy of the recent riots in Hackney will be?

GJB: I should really follow on from my previous point – about how our young people should be our most active. Truth is so many are, and there’s no greater example than the Riot Cleanup initiative that came to dominate the discourse immediately after the riots – and rightly so. That sort of bottom-up activism, localised but quick to spread via things like social networking (ironically, given the hysteria surrounding the regulation of BBM), is something young people, especially young people in Hackney, should be proud of. It’s our future.