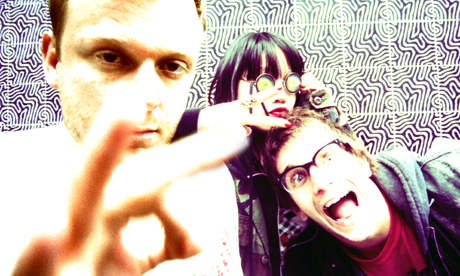 Sharpening their gnashers and buffing their claws, TEETH are preparing for attack.  Spawned from the belly of a primordial noise-shaped beast – one with a predilection for ear-bleeding electronics – this Dalston dance trio have gradually transmuted into a shimmering, pop-ready tour de force. But they’re not exactly Radio One friendly, just yet.

Originally built on less sturdy foundations than this inimitable brand of visceral, aggro-electro, two-thirds of TEETH (vocalist Veronica So and laptop pundit Ximon ) began life as an art performance collective – Little Paper Squares – but soon abandoned the project in search of a more focussed form of musical expression to sink their teeth into.

Veronica and Ximon conceived their anatomical moniker during a stroll down Kingsland Road – quite fitting perhaps, because TEETH (or TEETH!!!, T3ETH, and T∑∑TH) have since become an integral part of the area’s diverse sonic make-up, slipping into their unofficial role as ambassadors for the Hackney DIY scene, where acts like Male Bonding, Is Tropical and Fair Ohs surf the homemade waves of lo-fi.

“We played a lot what used to be Bardens Boudoir with many Hackney/Dalston bands who were interesting and sharing equipment and DIY’ing it most of the time,” says drummer Simon. “Many of us don’t sound similar musically but the feeling of community brought us to play the same shows and make music together.”

Although the band previously proclaimed ‘DALSTON4EVER’ on their myspace page, their experience of the area has been somewhat tainted by Hackney Council’s decision to rid them of their beloved Dalston Lane Queer Squat. Host to many scenes of vital community activism, the squat doubled up as a rehearsal space for the band in the early days and also became Ximon’s home for two years.

“It was a hub of sexualities and genders. So much good has come out of it which was sadly ruined by Hackney Council,” says Simon, lamenting its loss. “Squatting is vital to young people as it can really give them space in which to figure their shit out.”

Ximon and Veronica met through the insalubrious haze of seedy Soho nightspot Ghetto. After spending some time working as a duo – pitting Veronica’s uncompromising yelps against Ximon’s hammering laptop freak-outs – they enlisted the percussive help of drummer Simon Whybray, who they accordingly plucked from cyberspace.

Accordingly, because TEETH are self-confessed internet obsessives who are pretty knowledgeable in their obsession too – Ximon at one point temporarily hijacking Lady Gaga’s Twitter account, tweeting TEETH-centered expletives and causing quite the furore in the process.

Add a romantic twist to the tale – Simon and Veronica are now lovers who recently returned to Veronica’s native San Francisco – and after three years in the making, TEETH will release their debut album WHATEVER on September 19th, through Moshi Moshi. So what can we expect?

“The album reflects all the ideas we’ve had and sounds we’ve made over the past 3 years. It was all written at completely different times, and a whole range of stuff was happening to us emotionally. We just hope that this album doesn’t define us,” says Simon.

“We’re looking forward to going in new directions and exploring new ideas. TEETH has always been a work in progress. We’re not the type of band to say to ourselves ‘oh we should sound like this’. It’s a constant fearless journey. We just need to find a new place to practice…”

TEETH play The Nest on 15 July and Lovebox on 17 July.