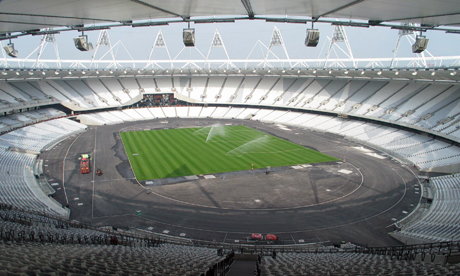 Right in the heart of the Olympic stadium there used to be a salmon-smoking factory. Its owner, Lance Forman, became a local figurehead for the compensation struggles of the 193 small businesses that occupied what is now the Olympic Park, eventually securing a prize alternative location on the bank of the River Lea navigation canal right opposite the place where Ennis, Ohuruogu and Bolt will do their stuff in less than a year from now.

I know its fishy-pink exterior well – it’s a landmark on towpath runs and cycle rides from my home to the stadium – and if Forman has his way so too will an array of media and other companies seeking Games Time outside broadcast locations and fab hospitality settings. Forman has appointed former BBC and ITV sports boss Brian Barwick to do deals for him. There’s talk of yachts on the river and rents of a million pounds a day.

For Forman, the Games could supply a profitable end to a long, disruptive journey. But what about the other 192 firms evicted from what was once a twilit labyrinth of an industrial estate between Stratford and Hackney Marshes? There’s a story there so complex it will never be fully told. Some were quite large, long-established concerns – Forman is a fourth-generation owner – while others were operating at what we might call the fringes of entrepreneurial society. It fell to the London Development Agency, the economic growth vehicle of the London Mayor, to negotiate a compulsory purchase price with each one and all those with financial interests in them – around 400 parties in all.

No one has counted how many firms have set up elsewhere and how many shut down (though Forman has put the latter at 75) but the LDA says most of the claims have now been settled, with 93 outstanding. It’s been a long, slow job, complete with the discovery two years ago of a large accountancy embarrassment. About half the cases were settled without a struggle, the firms accepting the LDA’s estimate of their value. Those that reckoned they were worth more were given 90 percent of the agency’s figure upfront and required to make a case for a higher sum. Around £150 million has been set aside to complete the job. Total outstanding claims come to roughly double that, but you would hardly expect them to be half of it, and the LDA is confident its pot will be big enough.

There’s still a bit of nostalgia around for the pre-Park days and I’m not immune to it myself. I once went to a huge wedding reception in a warehouse there, a Muslim affair with delicious food, bride and groom installed on mighty thrones and a string barrier dividing male and female guests that was casually breached all afternoon. The land acquisition saga seems set to continue into the post-LDA era, with the agency and its shrunken budget to be “folded in” to the GLA and a new set of tools provided for the Mayor to foster regeneration and economic growth. These will be debated at City Hall later this morning. As for Lance Forman,, he expects to know how well he’s finally done out of making way for London 2012 in the next few weeks.

← Cine-files: Rio, Dalston, LondonBicycle Thieves: at the View Tube and Folly for a Flyover →