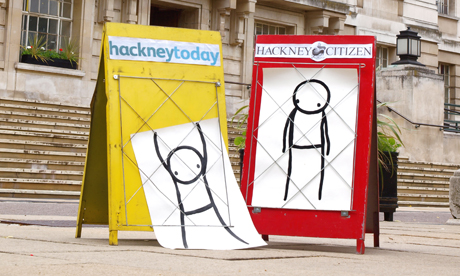 "Whoah!... Looks like council funded newspapers are hanging on in there after central government threatened to pull them out of circulation," says Hackney artist Stik. Photograph: Claude Crommelin

A decision by Hackney Council to continue publishing Hackney Today, its free fortnightly paper, in defiance of new government guidelines has sparked an angry response from minority party councillors. They claim the publication is a waste of public money and a political mouthpiece for the ruling Labour group.

“We’ve always felt that it [Hackney Today] is an organ of the majority [Labour] group on the Council,” he says. “Things which are carried out by minority group members and which benefit the community as a whole are not reported in the same depth or not at all.”

The Labour controlled council voted to keep the fortnightly newspaper this evening despite guidelines agreed by parliament in March which say councils must not produce such publications more than four times a year.

The council is one of the very few local authorities in the country to do so. The government’s Communities Secretary Eric Pickles recently single out Hackney, Tower Hamlets and Greenwich for flouting his guidelines, which were passed by Parliament in March.

The council’s own report on local authority publicity, which was considered by Cabinet this evening, maintains that the government guidelines are not legally enforceable, and that the council will abide by the principles of the government’s new Code of Recommended Practice.

Amongst other recommendations, the Code states: “Local authorities should not publish or incur expenditure in commissioning in hard copy or on any website, newsletters, newssheets or similar communications which seek to emulate commercial newspapers in style or content.”

Cllr Louisa Thomson, spokesperson for the Labour group on the council defends the paper.

“Hackney Today fulfils a vital role in letting residents know about local services – from the council, health services, the police and others – particularly as not everyone living in the borough has regular access to the internet,” she says. “This also contributes to greater transparency and accountability in local government.”