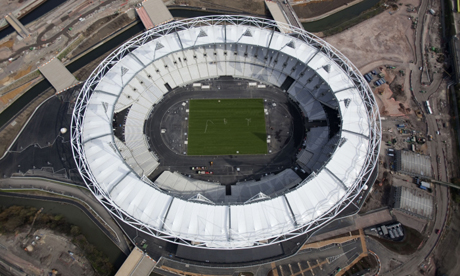 An aerial view of the Olympic Stadium. Photo:ODA

This article titled “Olympic Park: name that neighbourhood” was written by Dave Hill, for guardian.co.uk on Tuesday 19th April 2011 09.47 UTC

The Olympic Park Legacy Company recently made known four of the entries to its competition to name the five residential areas the park will eventually contain. It says the four are a sample of the “hundreds” it has received, and quite an instructive sample it is.

I’m guessing that the suggestion of Plastic Fantastic is aimed at Area 3 and a historical reference to the development of early forms of plastic in the old chemical industry area of Hackney Wick, where dry cleaning too was pioneered. But who would rush to reside in a place called that? Would it assist estate agents in their noble task of wooing purchasers of the mixture of flats and family homes destined to rise alongside the Lea Navigation Canal? Stylish modern living in, ah, Plastic Fantastic?

The OPLC’s Duncan Innes anticipates it being “quite a funky little area,” with “lots of arty people living there,” perhaps because the new local industry is galleries. From the commercial point of view, I’d be looking for bog standard pretentiousness in that case. Leaside Quarter? Wick Modern? Old Laundry?

The three other suggested names released are Little Athens and Redgravia, whose Olympic inspirations, though ingenious, are perhaps a bit too obvious, and Dog and Bike, which to me sounds like a pub and only a pub. Still, I suppose the efforts made public were chosen to give clues and motivation to other potential competitors rather than on the basis of quality, and they do concentrate the mind on the complexities of the task. It needs to be tackled seriously. The organisers reserve the right to reject all contenders if they don’t think they’re up to scratch and impose their own instead.

Should the five neighbourhoods’ names be Games-connected or reflect local history? They can’t really be both. If Games-connected, should they have a British or an international flavour? If localist, how local? And if history is to be the guide, whose history should take priority? That last is, of course, a political question and there was more than a whiff of politics about the decision to elongate the park’s name to the Queen Elizabeth Olympic Park. Would such eager deference to royalty have happened under a Labour government and Labour London Mayor?

The very Conservative Boris Johnson is plainly pleased with the monarchical association, and it is one that could in theory be extended to the neighbourhood names, giving the whole area a thematic unity. Charles Environs? Middleton Village? On the other hand, perhaps Boris’s predecessor, who played such a big part in securing the Games for the capital, should have a neighbourhood named after him to recognise his contribution? Alas, Kenton and Kensington have already been taken.

I’d been interested to hear your suggestions for Olympic Park neighbourhood names, and I’m sure the OPLC would too. Full details of its competition and the five neighbourhoods are here and the BBC, a partner in the enterprise, provides further helpful information here and here.

I’ll be away on holiday when this post goes live, which means I’m unlikely to respond to comments. However, I’m sure there will be more to say on this subject before the competition’s closing date of May 18.