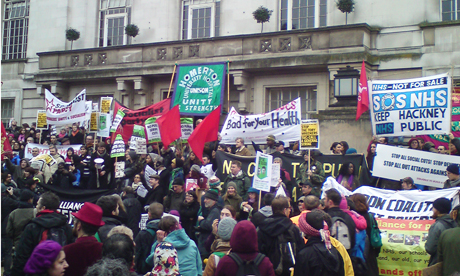 Cuts to staff numbers in Hackney’s Youth Services have led to concerns for the wellbeing of the borough’s young people  – despite council reassurances that no ‘frontline’ services will go.

At present, around half of employees in this area are on agency or fix-term contracts, a fact campaigners say is obscured by council proposals.

Critics say at least 90 out of 181 jobs will be cut from youth services, which under a new structure called ‘Young Hackney’, merges Youth Services, the Youth Support Team and Youth Offending Team. Campaign group Youth Fight for Jobs’ Suzanne Beishon says this will give more weight to youth workers with experience of youth offending, changing Youth Services’ focus from a support network to a more punitive body.

Said Beishon: “Whilst youth unemployment is at its highest level since records began, EMA is cut and university fees rise, the council is implementing vicious cuts to services that help us in one of the most deprived boroughs in the country.”

The group is also contesting cuts to the Connexions service. There is concern that much of the positive work of Youth Services will be undone by the cuts to youth worker numbers.

In the last two years, youth crime has dropped in Hackney, but Unison argues crime rates will jump as young people are left with less support.

Hackney Unison spokesman Matthew Waterfall said: “These cuts will hit young people hard. In a borough like Hackney with high unemployment and high levels of deprivation we should be doing more, not less, to provide young people with the support they need. The council has pledged to protect frontline services but is at the same time cutting them back”.

In the budget announced last month, Children and Young People’s Services saw cuts in funding from £79m in 2010/11 to £69m for the forthcoming year.

A consultation period for the Youth Service proposals ended on 16 March.

Mayor Jules Pipe said the council had been left in a “harsh position”, but stated he had “no option but to put local people above rhetoric and propose a budget that protects front line services.”

An anti-cuts demonstration is planned for 4 April outside Hackney Town Hall to coincide with the council’s Children’s and Young People’s Scrutiny Committee meeting.

Commenting on the restructuring of youth services, a council spokesperson said: “As a result of the government’s spending cuts, we have to ensure that more time is actually spent in delivering front-line services to young people and that there is far less emphasis on top-down management – the new structure ‘Young Hackney’ does exactly that and means no youth centres or services in Hackney will close.

“While there will be a reduction in staff numbers, the number of permanent posts in Young Hackney is about the same as the number of posts currently occupied by permanent employees. The formal consultation on Young Hackney has now been completed. This feedback will now be taken forward for further consideration into the final Delegated Powers Report (DPR), which will be issued in mid-April.”