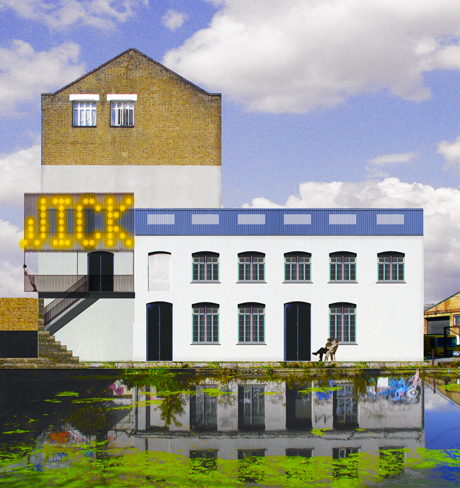 Sandwiched between the canal and Hackney Wick’s largest art studios, ‘The White Building’ does not demand your attention. The inside gutted and the outside peppered with graffiti, at first sight it barely registers. But the currently anonymous building is soon to be transformed into the jewel in the crown of Hackney Wick’s well-established art scene.

Following a London Development Agency-backed competition to redevelop the building, architect David Kohn was awarded a budget of £250,000 to turn the disused print works into a contemporary arts centre which he hopes will provide a strong platform for local artists to promote their work. Plans include large exhibition space indoors, outdoor projection screen and a ‘floating garden’ on the canal.

“From the start, we were rooting for David’s design to be the winner,” says local resident and community blogger Sóna Abantu-Choudry. “It will attract many more artists to an already burgeoning creative quarter of London.”

Is she expecting more re-development projects in Hackney Wick in the future? “Yes. There are already many artists and creative types all over Hackney Wick, and now there are many developers wondering what to do with all these incredible old warehouses and factories.”

But does the arts centre pose a threat to the well-established galleries and artists already based in the Wick? No, according to local artist and director of Mother Studios Joanna Hughes. “Actually it’s quite thrilling for the artists,” she says. “The fact that they want to build the arts centre here just shows that they have faith in the artists here and the artistic community.”

Eleanor Fawcett, who is head of design coordination for the Olympics at Design for London, was on the judging panel for the arts centre award, and is well respected by the local artists: “Eleanor is fantastic,” says Joanna, “a real champion of the arts. She’s trying to develop the area in a way that regenerates but at the same time really takes on board the concerns of the local artists.”

But there is a fine line between regeneration and pushing out the artists in Hackney Wick, as local artist Laura May Lewis explains: “Rents have already increased – which is normal when an area faces regeneration – but if it goes up too drastically the artists will move on: much the same as what happened in Shoreditch.”

However, she says the arts centre could be of great benefit to the local artists: “Hopefully it will take an interest in helping the art community … I also strongly believe that the artists could help the arts centre – it was indeed they who managed to bring 25,000 visitors to the area through the Hackney WickED Art Festival in 2010.”

Regeneration? Or gentrification? Whatever happens to Hackney Wick in this fascinating stage in the areas history, Joanna Hughes is upbeat about the new arts centre and the areas future in general: “‘I think the arts centre will give confidence to people out here. Of course gentrification will happen, but that’s not because of what’s going on in The White Building.

“Normally the artists would just be pushed out but it’s not going to happen here altogether. Hackney Wick has such a strong, dense artistic community – the sheer number of artists working here really has given power to the people.”