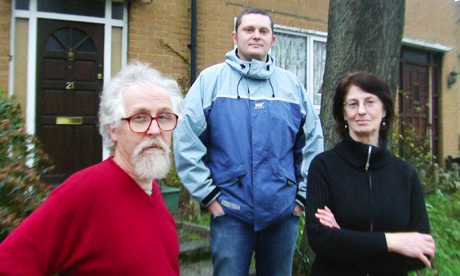 A funding gap of tens of millions of pounds could jeopardise the next stage in one of the largest regeneration projects in Europe.

Plans to redevelop the historic Woodberry Down Estate just north of Stoke Newington – a massive area of prime real estate overlooking the West Reservoir – have been beset by delays since they were first outlined over 10 years ago.

The first stage of the project, which involves the development of hundreds of properties to be sold on the open market through the council’s private partner, Berkeley Homes, began in 2009 and is scheduled for completion next year.

Under the plans, funds from property sales will go towards replacing dilapidated social housing – but now Town Hall documents have revealed that “difficult market conditions” have meant take up of the new properties has been poorer than expected.

This, combined with the withdrawal of a government grant, has left the scheme with a funding gap of around £60 million.

Woodberry Down resident Klaus Graichen, who has lived on the estate for 15 years and is chair of the Springpark Tenants’ and Residents’ Association, said he hoped the council would now scrap plans to demolish his home.

He said: “The future of this project depends on whether they are able to actually sell these flats at the prices they’ve budgeted for. We want to keep our homes and anything that slows down the whole project is to our benefit. I was predicting from the start that they would run out of money and would get stuck halfway through the project.”

During a consultation process branded “farcical” by Mr Graichen, the Springpark Tenants’ and Residents’ Association unsuccessfully campaigned for low-rise, terraced housing in Springpark Drive to be left out of the council’s plans.

This month Mr Graichen criticised the “cynical segregation” of private and socially rented homes in the new development, marketed as “Woodberry Park” on the Berkeley Homes website.

He said: “Instead of integrating the two types of housing, they are building one very high block that is all social housing and a group of lower buildings for private flats.”

Others complained of being unable to either sell their homes or make repairs because of uncertainty over the estate’s future.

Resident Joan Brennan said: “We are in limbo. They have misled us about the plans throughout.”

The Woodberry Down Estate was built shortly after the end of the war as a utopian “estate of the future”.

It contained Woodberry Down School, one of the country’s first comprehensives, and the John Scott Health Centre, the first purpose-built NHS health centre in London – now a listed building and due to be converted into flats as part of redevelopment plans.

In an agenda for a Town Hall meeting about the plans last month, council planning chiefs stated: “The combination of the withdrawal of £40m from the Government for stock transfer, difficult market conditions and the reduction in the amount of funding received from the HCA, has left the next phase of the development with a funding gap of circa £60m.”

The document outlines proposals to plug the gap by postponing certain elements of the project and renegotiating the terms of their agreement with Berkeley Homes.

Hackney Council said it is contributing over £16m during the next four years, while Berkeley Homes has invested more than £30m. The government’s Homes and Communities Agency has also provided funding for affordable housing.

Cllr Karen Alcock, Deputy Mayor of Hackney, said: “Hackney Council made a pledge to residents that despite the economic climate we would find new and innovative methods with partners to provide housing at Woodberry Down. The Council’s own investment demonstrates our ongoing commitment to one of the largest regeneration programmes in the capital.”

Justin Tibaldi, Managing Director of Berkeley Homes (Capital) said: “Woodberry Down is one of the most significant regeneration schemes to be launched in the country in the past decade. Berkeley Homes are totally committed to it and will continue to work closely with our partners to ensure that together we deliver the investment necessary to create a real, sustainable community where people will choose to live, and that provides long-term social and economic benefits for the wider area.”

A Palace for Us

‘Sword of Damocles’ hangs over Woodberry Down

Woodberry Down residents to lose homes with gardens