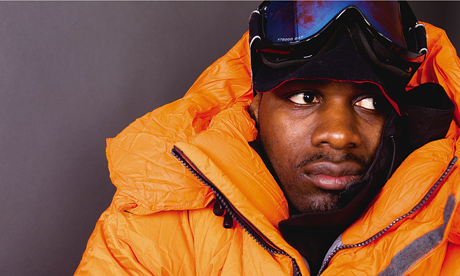 A Hackney man who was the first black Briton to reach to North Pole is now bidding to carry the Olympic torch.

Dwayne Fields, 28, from Stoke Newington, competed in the Peary and Hansen Race across 370 miles of arctic tundra in April and May of this year in the hope of being chosen to carry the flame on part of its journey through Hackney.

After applying to compete in the Polar challenge, Fields joined two other explorers to form Team Global Village. Preparation for the event involved a gruelling ten-month training schedule to prepare his body for the sub-freezing temperatures and the exertion of dragging 45kg of kit on skis during the 4-week trek.

En route to the North Pole, he saw polar bears and their cubs and had to survive through temperatures as low as -50C.

Now back in Hackney, Fields wants to use his experiences to inspire young people from the borough.

Although official applications to carry the Olympic flame do not begin until March 2011, he is already trying to garner support for what would be the realisation of a lifetime’s ambition.

“I have always dreamed of being involved with the Olympics and I have already applied to be a volunteer”, he said. “Each person gets to carry [the torch] for 400 metres, and if got to carry it that would represent a milestone for me. It’s almost like carrying the torch would be a reward for all the hard work I put into everything else.”

Fields has also signed up for the Gold Challenge, which involves completing various Olympic disciplines to raise money for charity, in Dwayne’s case the African Caribbean Leukaemia Trust.

The athlete, who is currently studying for a degree in psychology and third world studies at the University of East London, is keen to use his success to encourage young people to follow their ambitions, regardless of their background.

He has given a series of talks to school children from the area about seizing life’s opportunities. “It’s all about breaking down barriers,” Fields says.

“They don’t matter, and I am a living example of that.  I say to them ‘I am from the same area and the same background as you, but I chose to follow my dreams and that is why I am here.'”