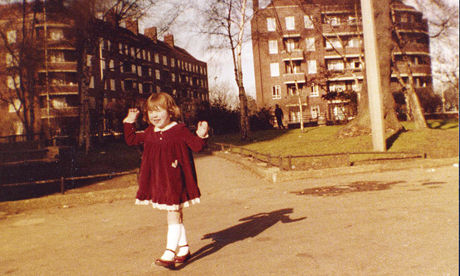 Jackie 1973 by Erica Dobbs. Archival image used by Tom Hunter in the making of A Palace for Us 2010

Hackney meets Hollywood this month, as the borough gets the box office treatment in a new film by London-based artist Tom Hunter at the Rio Cinema and the Serpentine Gallery.

A Palace for Us looks at half a century of life on the Woodberry Down Estate in Hackney, with three local residents recounting their experiences of the estate since it was first built almost 50 years ago.

The estate’s history is a lengthy and fascinating one, beginning in the chaos of post-war England. After the urban destruction wreaked by bombing during the second the world war, construction of the Woodberry Down Estate began in 1946 and was finally completed in 1962.

At the time it was hailed ‘the estate of the future’, boasting 57 housing blocks housing 2500 homes for local residents living in run down accommodation.

The film glides through important episodes in the estate’s history, making use of first-person accounts and flashbacks. It goes from the initial bombing of Stoke Newington in 1944 to the lively atmosphere of the 1950s when the estate was a lively place for the younger generation.

Then it moves on into the 1960s, when the first generation of children born on the estate were growing up, and finally finishes with the present day.

Some of the estate’s older residents are still playing an instrumental role in ensuring the estate continues to evolve with a major regeneration project.

For artist Tom Hunter, the issue of social housing is a hugely relevant and important one. “Housing is very political, when the Woodberry was built it was built to create a workers paradise out of the rubble of WWII,” he says.

“Now with social housing being abandoned by the state, it’s an apt time to think about how we house this country’s people.”

A Palace for Us is Hunter’s second film project and he is already renowned for his photographic works which portray the lives behind the history of the East End.

“This is an ongoing study into the local my local area, which I hope one day will go towards painting a larger picture of what it means to live in Hackney with its rich history and its great diversity,” he says.

Hunter’s depiction of Woodberry Down is particularly insightful thanks to the long-term residency he spent on the estate, granting him intimate knowledge of the area and its inhabitants.

He says: “I spent nearly three years attending tea mornings with senior citizens on the Woodberry Down Estate. The group gave me the idea, stories and inspiration for the film.”

“I’ve learnt so much from the senior citizens from the Woodberry Down Estate, it feels like I’ve been studying for a PhD in history with all their stories and takes on life,” he adds.

“I hope the film I’m giving them will be a fair exchange, by trying to document moments of this rich history before its lost in the ruins of the estate.”

The film forms part of the Serpentine Gallery’s Skills Exchange project which encourages creative professionals to work with local residents to bring about social and community change.

Hunter also collaborated with Age Concern Hackney whilst making the film, participating regularly in their weekly group for older people, and found the experience hugely revealing.