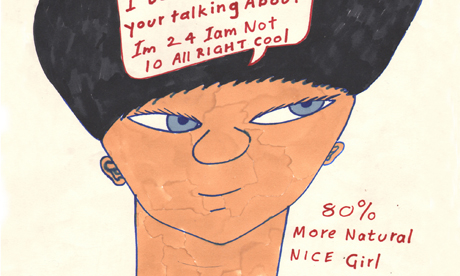 "Look I never throw away the milk so I don’t know what you’re talking about..."

It’s hard to define what is so captivating about Rudolph Lindo’s work.  His drawings depict people at a particular point in time, but the bold, simple pen lines also seem to capture something about their essential character.

In the same way, the enigmatic words they express in speech and thought bubbles seem to be addressing very specific concerns and feelings, while suggesting something about the person’s wider situation. There is a focus on numbers – whether ages, heights, percentages, or amounts of money.

The people often appear to be in conversation with someone (but we don’t know who), and are sometimes in the midst of some petty dispute.  One, for example, says “Look I never throw away the milk so I don’t know what you’re talking about, I’m 24 I am not 10.  All right cool.”

These works remind us of the way that seemingly trivial arguments or thoughts can be a reflection of larger issues.  The words can be both amusing and moving.  One says “I look like the 70s, but I’m 28, 28 – got white boots, no one knew me yeah.”  Beside her is written “30% mutch nicer”.

Rudolph Lindo brings a distinct perspective to ideas of communication, language, and defining a person.  He explains that much of his work depicts friends or people he has known in the past – one, for example, is his old teacher.  But in general, he prefers to let the drawings speak for themselves. 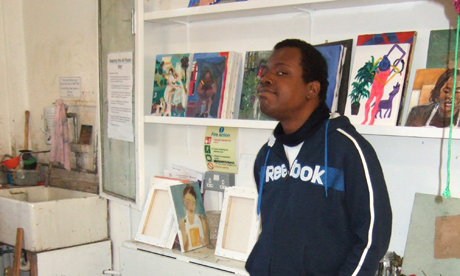 Rudolph Lindo is excited about his upcoming retrospective exhibition at Core Arts, which begins on 2 December.  He hopes it will help his work gain a wider audience, which it certainly deserves.

← Mouth Off this Christmas for Kids CompanyLetter: Sex establishments – the other side →