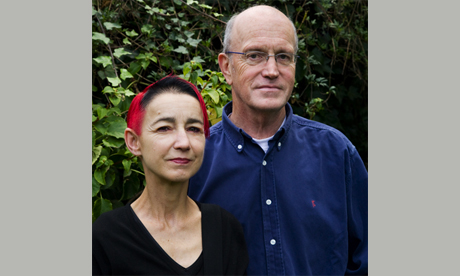 It’s a small, unassuming little volume, Postcards From the 7th Floor. Complete with a pale cover and minimal external design, the reader gains no sense of the work’s true nature at first glance. But do not be fooled. The contents of this collaborative work between Iain Sinclair and Oona Grimes is riotous, bold and blissfully original.

Sinclair is better known for works such as Hackney, That Rose-Red Empire, an epic book mapping the history of the borough, but the inspiration for this latest work is rather different. In Sinclair’s words, it is a work inspired by and created in homage to “a very extraordinary somewhat decayed building”.

The building in question is Marine Court, a vast concrete modernist apartment block, constructed in the 1930s and modelled on the Queen Mary, the famous ocean liner. Towering over the seafront in St Leonards-on-Sea, an area in the small seaside town of Hastings, Marine Court might seem an unlikely candidate for a poetic muse. Nevertheless, Sinclair has owned a flat in the building for decades, using it as a retreat from hectic Hackney life and has long been besotted with it. It was during contemplations from his seventh floor window that he began jotting down impressions and thoughts sparked by the area.

“Over a long period of time I started to do a kind of writing that was very different from the more mediated writing I was doing on the Hackney landscape,” he reveals. “These were really personal things that were like little postcards, scribbled in a notebook more or less the shape of a postcard”.

The more he scribbled, the more he found curious parallels between the coastal oasis and Hackney. “There’s definitely a twinning between the St Leonards part of the town and Hackney,” he says. “St Leonards has got this slightly subversive quality to it, a mix of quite wealthy bohemian artists and real absolute down and out people”. Graffiti artist Banksy even found time to grace St Leonards with one of his renowned paintings which, in glaringly un-London fashion, the local council celebrated and sought to preserve.

As a wave of poems and the odd snippet of prose began to emerge, Sinclair sought out friend and artist Oona Grimes with a view to joining forces with her in a Marine Court centred project. “I’d worked with Oona on my Hackney book, and her mappings and her drawings there were so perceptive and right for the text that I thought maybe I could invite Oona to think about this and do not illustrations but a series of postcards of her own based on the same themes,” says Sinclair.

It took only a few brief visits for the artist to become equally besotted with the building, which she felt resonated with her from the very beginning. “It felt like I had come home – there was something very familiar about it”, she says. “It’s like a glorious crumbling Marie Celeste, a huge frozen empire. It’s filled with all of these condensed personal histories and stories and one can project different ideas onto them.”

What followed, however, was a collaboration which was unlike the pair’s previous creative endeavours. Whilst Grimes had worked from finished chapters of Hackney, That Rose-Red Empire, producing illustrations based on the aspects that intrigued her most, with Postcards it was an entirely different process.

“This was a very pure collaboration conversation,” explains Sinclair. “With this book I hadn’t written it, finished or assembled it at the time when Oona started to do her drawings, so her drawings were totally done within the spirit [of the book] but without having to make any sort of reference to the text”. An approach entirely in keeping with the postcard notion of letter-writing and communicating. After all, “a postcard is a correspondence”, as Grimes points out.

The fruits of this creative conversation are truly unique. Postcards is devilishly hard to define. Put crudely, it is a small book, a pamphlet even, split between Sinclair’s short poems in one half and Grimes’s eye-popping creations printed in reverse in the other half. Design-wise, the work has much in common with old children’s puzzle books, where one had to turn the book over and read it back to front to unearth the puzzle solutions. Employing such a design, Grimes explains, allows the two modes of expression to form one work, without one appearing to ‘accompany’ the other. “It’s like a mirroring of text and image, and they both stand up with their individual qualities.”

But what sets the book apart is the manner in which the two sections effortlessly interweave and overlap. Sinclair’s poems experiment with colours, layout and even images, whilst Grimes’s visual contributions are peppered with headlines and words, woven in among the illustrations.

Sinclair’s poems provide a canvas for bizarre but highly detailed portraits of local individuals, from ‘the cranked vicar by the railway’ to the mysterious ‘eiderdown man’, a real-life figure who walked the streets clad only in a duvet. Depicting such characters through poetry, rather than prose, gave Sinclair far more freedom in his portrayals.

“These are like Polaroid portraits of realities. It’s a composite picture made of incidents, real things that would not be connected in a filmic sense,” he explains. “It doesn’t need to have the logic that would go into a piece of prose. You treat it like one of Oona’s drawings. You wouldn’t necessarily know exactly what’s happening in one of Oona’s visual representations, but you have this sensation of something, some very specific detail and some that are mysterious, and that’s the way this works.” 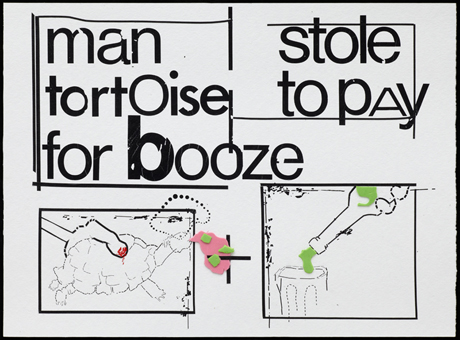 Hard-hitting social messages also seep through Sinclair’s words and leap from Grimes’s work. Nowhere is this more evident than in their mutual use of headlines in their work. “Smug swans attack dalmatian!” screams one headline used in Grimes’ work, “Man stole tortoise to pay for booze” yelps another. Sinclair draws heavily on headlines too, including disturbing soundbites such as “Beach soccer axed over gun violence” and “Moleman tunneller found dead” as poem titles. It is a collaging effect which traces right back to Cubist art, where artists would integrate clippings from French newspapers into their work.

Both writer and artist admit to being fascinated by the absurd headlines Hackney’s local publications come up with. In Postcards, both have used entirely genuine headlines from newspapers in both Hackney and Hastings, pasting them onto figures or events based in St Leonards to highlight the strong parallels between the two areas. Sinclair finds something poetic in the headlines themselves – “the rhythm and the weirdness of those things, particularly in Hackney. I think they’re like concrete poems.”

Violence and ethnic or racial tensions are also traceable throughout the work, lending it a really quite political edge. Stark splashes of red blood speckle many of Grimes’s predominantly black and white images, which depict, among other things, a knife-wielding judge, blood spattered axes and ticking bombs.

“There was a very definite underlying political agenda, but in an absurdist way,” admits Sinclair of these ‘postcards’. “They’re not polemic but they’re to do with how we live, we live in an absurd political world, where the madness of a lot of council policies and policies of central government are reflected in these bizarre incidents with swans and foxes and Dalmatians.”

Given the unusual nature of this remarkable collaborative effort, it is unsurprising that the book is being published by a local publishing house based in East Sussex. Sinclair believes that the ‘timidity’ of mainstream publishing, as well as the niche appeal Postcards meant that larger firms would never have dared to publish the work. “These are private things really just like little postcards to like-minded souls, I didn’t imagine it could have an audience in the way that the ordinary books I do have,” he says.

Both Grimes and Sinclair lament the decline in independent bookshops prepared to stock quirky ground-breaking works, although Hackney itself is blessed with a number of smaller bookshops willing to sell non-mainstream books. Grimes points out that the timidity of main-stream publishing house has led young artists and writers to resort to self-publication online. “People aren’t relying on and aren’t even bothering to approach larger publishers,” she points out.

Postcards, in its own way, represents an effort to encourage this sort of creativity and innovation. “It’s hopefully part of a new movement,” says Sinclair, as he recalls the period of innovation in the 1960s which saw small independent presses publishing extraordinary collaborations between renowned American artists and English poets. “But to have that you had to have independent bookshops to sell the things, and that’s shrivelled up. So where do you go now if you were a new writer? You don’t even see examples of this kind of book unless you go to a small press fair or something.”

This is a grave loss when you consider the visual and literary impact of works like Postcards. Sinclair’s final verdict on the book is spot on. “It’s an unactivated grenade,” he says. “Made out of Oona’s playful materials it looks like felt, and then you open it up and hopefully it might explode and blow your hand off.”

There certainly is something of the explosive about this book. Forget breath of fresh air, this is a veritable tornado of a book that will provide young artists and writers with the encouragement they need to go on producing innovative and ground breaking work.