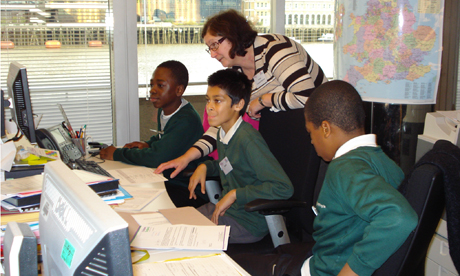 Industry giants had to watch out for pint-size rivals, as thousands of children across the country took control for day in organisations across the nation.

Today marks the fourth annual Takeover Day, during which young people were given the chance to shadow high-placed professionals, give their views on key issues and help the adults make important decisions.

Youngsters from Hackney’s Nightingale Primary School, and across the rest of the country, got the chance to seize power for day in a variety of organisations and roles.

Professionals including MPs, chief executives and teachers ceded power to pupils nationwide as part of the annual event. The day involved around 40,000 young people, up from 30,000 last year.

Year six children from Nightingale Primary School took the reins in the Children’s Commissioner’s office at London Bridge. The new additions tried out different jobs, discussed the transition to secondary school and debated what makes a great teacher.

Hazel Fraser, deputy headteacher at the school, said: “I am thrilled that the children have access to such an exciting opportunity to develop their knowledge and experience of the working world.”

“It is only through these initiatives that children’s eyes can be widened to possible career opportunities.”

The Mayor of London, Boris Johnson, also participated in the day by giving over his role to a Hackney Volunteer Police Cadet.”

“This is a fantastic way to give our youngsters a taste of being top dog for the day and experience firsthand what it’s like to be an MP, radio presenter, teacher or even the Mayor of London!” he said.

“I’m a firm believer in schemes that build young people’s self esteem and help them realise their potential and I hope Takeover Day will inspire the next generation to greatness.”

Children’s Commissioner Maggie Atkinson said of the day: “We’ve had an excellent response from people across the country and hundreds of organisations are taking part, from mayors to museums, and broadcasters to businesses.