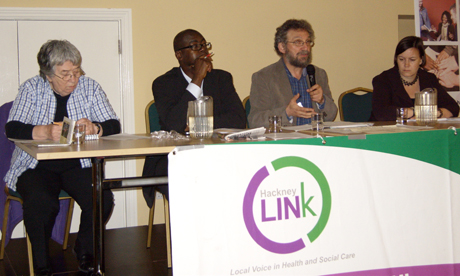 The borough’s watchdog for health and adult social care services has slammed  the government’s health White Paper, arguing that it could damage and undermine the NHS.

At a  public meeting organised by the Hackney Local Involvement Network (Hackney LINk),  the government’s recent White Paper was criticised by a range of speakers including Meg Hillier, MP for Hackney South and Shoreditch, Cllr Patrick Vernon from the Afiya Trust and Dot Gibson from the National Pensioners Convention.

The watchdog argues that the government’s proposal to transfer responsibility for purchasing services from primary care trusts to groups of GP practices will harm the doctor-patient relationship, reduce accountability to patients and require the use of expensive consultancy services and private healthcare companies.

LINk members are objecting to the transfer of taxpayers’ money to such companies and claimed the government has no mandate for privatisation from the recent election.

A statement from 60 local GPs was read out: “At a joint LMC/ ELIC meeting of about 60 City and Hackney GPs to discuss commissioning and the Health White Paper last night, there was almost unanimous condemnation of the Health White Paper, specifically commissioning and the purchaser-provider split.  We agreed that commissioning was being forced upon us in spite of evidence that it will raise costs without benefiting patient care, it will worsen GP-patient relationships and we will have to manage it without the time, skills or money required. We will register our strongest opposition whilst having no choice but to prepare to take it on.”.

The LINk now hopes to get local people to write to their GPs, as well as to their MPs and councillors, urging opposition to the proposals.

Malcolm Alexander, Chair of Hackney LINk, said the LINk wanted to lead the local response to the White Paper by bringing together MPs, councillors, the voluntary sector and the general public.

“There are concerns that this White Paper puts the National Health Service at considerable risk.  We don’t want to wake up one day and find that our healthcare has gone to the private sector and that the NHS has been left as nothing more than a brand name.  That’s why we need to organise a powerful response now.  We must ensure that the NHS is fully accountable to patients and the public and is focused on their needs, not the need to make profits out of healthcare.  We must form a powerful alliance with local community organisations, doctors and the general public to persuade the government to withdraw their harmful plans for the NHS.”