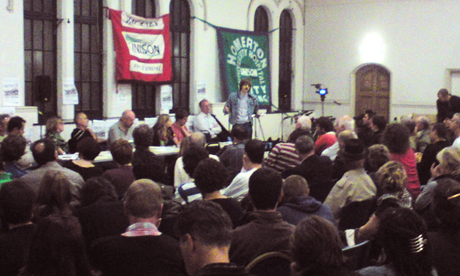 In protest at the government’s proposed cuts to public services, around 150 concerned citizens attended a public meeting called by a new group, Hackney Alliance, on Thursday 23 September at the Round Chapel in Clapton.

Severe cuts to public services are expected in the coming months, with Hackney Council seeing a budget cut of around £80 million. The government claims that the cuts are a necessary response to the severe debt the country is suffering.

However, Glyn Harries, a member of Hackney Alliance said: “[I] do not go along with that. Last year the country saw £123 billion in uncollected corporate tax. Historically, the country has always been in debt.  When the welfare state was created after World War 2, national debt was four times the amount it is now.”

Harries believes that the cuts are “a privatisation strategy, using debt as an excuse”.

Several local trade unions including Unison and Unite have now affiliated to the Alliance, as have local anti-cuts groups such as Hackney Friends of Local Nurseries, and Keep our NHS Public. The Alliance also includes other community groups and concerned residents. It meets monthly and is open to everyone who plans to support the local campaigns. A public lobby has been planned on 27 October at Hackney Town Hall.

The following week Hackney Council will be announcing its plans in response to the government’s spending review.