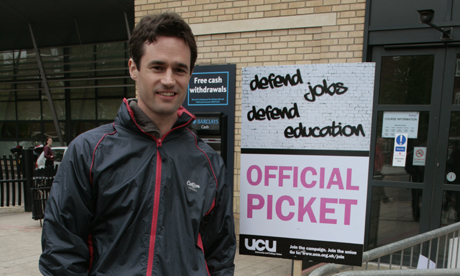 Lecturers at Hackney Community College picketed yesterday outside the College’s premises in Hoxton to protest against the threat of job cuts.

The strike action was timed to coincide with similar demonstrations across London, organised by the University and College Union (UCU).

Protesters claim that up to 60 jobs are at risk. Subjects set to suffer the most cuts at the further education institution include literacy, numeracy, English as a second language and plumbing. Jobs are also at risk in support services such as libraries and IT.

English teacher Mark Pope said, “We’re really afraid that ESOL [English as a second language] jobs like mine may be cut from September 2010.”

John Barber, lecturer in counselling and the College’s UCU branch secretary, noted that “the impact on our local community is highly significant.”

Hackney Community College is by far the biggest provider of education in the borough to over 18s.

Commenting on the potential loss of places on already over-subscribed plumbing courses, he said, “The government talks a lot about skills shortages. To us it’s quite bizarre that in such a context plumbing courses should be threatened.”

Mr Barber acknowledged that the College’s management was subject to significant funding constraints at the moment, and he said the union and management have shown that they can campaign together against cuts in further education and UCU “welcomes cooperation with management” on the matter whenever possible.

But he noted that, faced with compulsory redundancies, the lecturers had no option but to take serious and determined action.

Speaking of the cuts to further education expected after the General Election, he said, “Unfortunately things are going to get worse, not better. We have to take a stand.”

“I’m lobbying Government ministers, talking to representatives from the main political parties, and working alongside the Association of Colleges to fight on behalf of our students and communities.

“We are undertaking detailed work, and consulting staff and unions to see how we can make the £1m saving that we need to make, with the least damaging effect. We regret any disruption to our students’ learning as a result of the trade union’s decision to take strike action.”