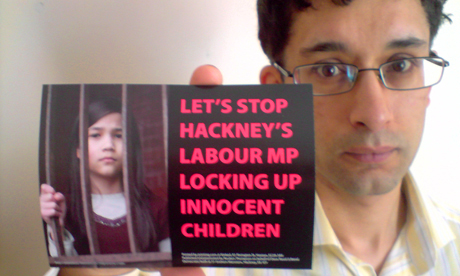 Meg Hillier, Hackney South and Shoreditch’s former MP, now Labour candidate, has hit back at criticism of her support for Yarl’s Wood, the detention centre for asylum seekers.

Ms Hillier, a junior Home Office minister responsible for Yarl’s Wood, told the Citizen, “We’d all like to do motherhood and apple pie, but whoever is in Government is faced with tough issues and tough decisions.

“Of course I am concerned about the children in the asylum system.

“I am working to reduce the number of children being detained, which includes access to better legal support for families at the beginning of the asylum process.

“But it’s important to look at the consequences of alternative policies. One is to separate parents from their children, which I don’t think is acceptable.”

Both the Children’s Commissioner for England and the Prisons Inspector have raised concerns about child welfare at Yarl’s Wood, where there have also been reports of hunger strikes by detainees.

However, the Hackney South Labour candidate denied such protests took place. “All detainees are treated with dignity and respect,” she told MPs in February.

That statement was publicly challenged by Diane Abbott, candidate for Hackney North and Stoke Newington and fellow Labour Member, who criticised conditions at Yarl’s Wood and called for its closure.

Ms Abbott told the Citizen: “I first visited Yarl’s Wood in 2007 and was shocked by what I saw.

“There is ample evidence that children there suffer trauma. The whole process of being snatched from their homes by government officials, often at day-break, is traumatic. But being kept behind bars is also cruel and unusual for children.

“There is little doubt that the practice is contrary to the UN Convention on the Rights of Child.

“As a mother I feel strongly that we should not be keeping innocent children in custody.

“Their lives are being sacrificed to appease rabid anti-asylum seeker sentiment in the tabloid press.”

Ms Hillier responded, “Like Diane Abbott, I don’t shy away from difficult issues. Having this role in Government, it would be highly irresponsible to do so.”

Dave Raval, Liberal Democrat candidate for Hackney South, has likened the detention of children to the actions of a dictatorship.

“It has no place in a civilised society. Now is the time to put a stop to this inhumane policy,” he said.

A judicial review of government policy regarding Yarl’s Wood was granted in March.

Lawyers acting on behalf of several detainees argue that conditions at the centre breach articles three, five and eight – concerning torture, liberty and privacy – of the European Convention on Human Rights.

Hackney South’s Green Party candidate, Polly Lane, said, “Many women at Yarl’s Wood have had no option but to go on hunger strike in protest at the appalling way in which they have been treated by staff, a fact that the Home Office continues to deny, forcing the women to pursue a claim under the Human Rights Act.”

Some, however, were unimpressed by the Liberal Democrat campaign.

Denny de la Haye, Hackney South independent candidate for direct digital democracy, said, “I’m not a fan of negative campaigning, I’d rather hear about how each candidate would improve our country if elected.

“My strategy is to increase the public’s power in the political process, which would give them more ability to intervene in issues like Yarl’s Wood.”