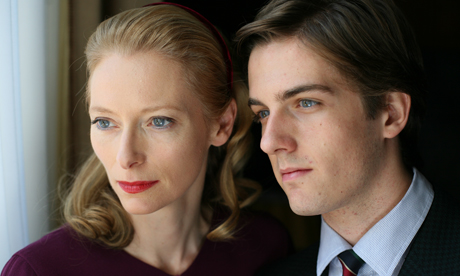 Tilda Swinton and Mattia Zaccaro in I Am Love. Photo courtesy of Magnolia Pictures

Set in Milan and telling of a family saga of sex, secrecy and scandal, Sicilian director Luca Guadagnino makes this most delicate of Italian films with Tilda Swinton as the lead.

It opens with an introduction to the Reechis, a wealthy Milanese family; whilst this initial intake might feel overwhelming, it becomes more manageable as the family members’ individual stories slowly become more apparent.

The family’s patriarch, Edoardo Sr, is handing over its burgeoning textile business to his son Tancredi (Pippo Delbono) and grandson Edoardo Jnr (Flavio Parenti) before his death.

Emma Reechi (Tilda Swinton), Tancredi’s wife, slowly becomes infatuated with much more than the cooking skills of her son’s new friend and talented chef Antonio, as Edoardo Jnr (Edo) and Antonio – who became good friends through the most unlikely of happenings – plan to open up a restaurant together.

Backed by the organisational skills and cooking elegance of Edoardo’s mother, Emma, a combination of forced and coincidental happenings make for the most sexual of adventures that follow.

In public this upper class family appear fully functional and shrewd in its business dealings. But I am Love, in delving into the complexities of the family, demonstrates the opposite.

Whilst colours ooze and the storytelling is stylish, Luca Guadagnino has made the evening scenes dark and very underexposed in an otherwise well shot picture.

Tilda Swinton delivers the necessary emotion with aplomb. The supporting cast add extra dimensions to the film in which less dialogue means that the story is told more through fine acting.

If you are looking for the person to whom the title of the film refers, no interpretation is any more more obvious than the title itself,  Io Sono l’Amore (I Am Love).

The overall meanings behind the film come to fruition in what may seem to be a tragic ending, but which could also be regarded as a soul strengthening triumph.

More about what’s on.