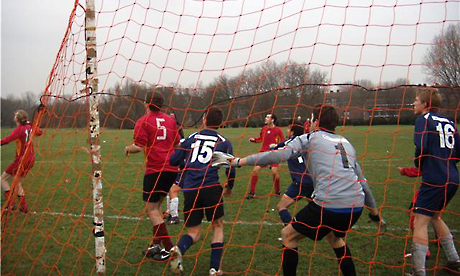 Recreativo Hackney FC (in maroon) in action on the Marshes

Recently unveiled plans for new community football facilities at Hackney Marshes have been slammed by a prominent local league official.

But Jonnie Walker, Chairman of the Hackney and Leyton League, blasted the plans for failing to provide enough changing rooms or car parking to meet current football demands at the Marshes.

Asked what he thought of the proposals, Walker said, ‘Totally inadequate. There are not enough dressing rooms so we are going to have to stagger kick off times. We are the only big league left, the others have all gone, The FA [ Football Association] want us to expand but the facilities mean it’s a real problem.”

Currently under pressure from the Football Association to expand grassroots football in the area, the League has been forced to agree to stagger kick-off times just to allow for compatibility between the present five-division structure and the new facilities.

Already swimming against the tide in attempting to swell its numbers, any further expansion for the last remaining significant league to play on the Marshes will now be much harder to achieve.

Whilst the Mayor may insist that the Community Hub “is a key part of our investment programme which is using the London 2012 Games as an opportunity to give our residents world-class sports facilities”, for Walker the plans for the Marshes, including the loss of the East Marsh to an Olympic car park in 2011, represent, “total disaster for football in East London, which is already diminishing at an alarming rate.”

← An Academy of InvestigationsWollstonecraft Live! Exhibition →