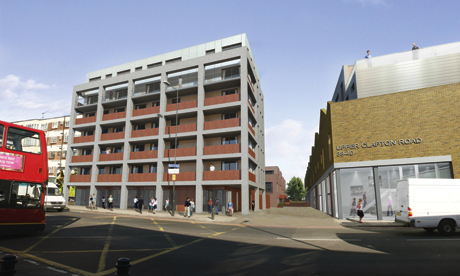 Last month local residents and councillors again gave the thumbs-down to the revised plans to develop the Clapton Tram Sheds.

The Old Tram Depot at 38-40 Upper Clapton Road, built in 1882 for storing horse drawn trams, is currently home to an art gallery, studio spaces and businesses including furniture makers and fabric suppliers.

Local traders and residents are concerned that these existing businesses may not be provided for under the new scheme.

Developers want to knock down the existing industrial building and partially demolition of the existing tram shed, in order to erect five buildings, up to seven storeys in height, with retail space and car parking.

On Wednesday 13 January the developer held a drop-in exhibition where a model and boards were displayed providing details and images of the submitted proposals, as well as information on the incentive packages available for businesses currently on site.

Members of the development team, including the developer, architects and planning consultants, were all on hand to provide information, answer questions and address individual queries.

Amongst the feedback that the developer, Upper Clapton LLP, said that it received was that residents are largely in favour of incentive packages being offered to encourage current occupiers of the tram sheds back to the site.

The developer also said that almost all of the attendees who filled in questionnaires felt that a contribution to a car club space in the area was a good idea, too.

The current proposals for the mixed-use redevelopment include:

• Renovation and extension of the larger tram shed

• A new larger community centre with improved facilities and access

• The incentive package for businesses is 1-year free rent for a 5-year lease or 18 months free-rent for a 10-year lease. Upper Clapton LLP will also offer to fund removal costs.

Sean Meadows of Upper Clapton Road, commented, ““All the feedback we received is invaluable and, where possible, we will be working to address the issues raised, for example ensuring the retail space is divided into two smaller units and by providing a car club space.”

However, in a statement to the Hackney Citizen, Leabridge Ward councillors Ian Rathbone, Linda Kelly, Deniz Oguzkanli said, “Only a few people turned up for this exhibition.

“We had more than 80 people turn up for a public meeting [on Tuesday 19 January] at B6 [Brooke House Sixth Form College] we organised and all present were opposed to the whole development from beginning to end – the loss of more than 100 local jobs, the ugly blockhouse of flats, the inadequate transport plan for the site, the overlooking of local residents’ properties.

“And there will be the added burden on schools, doctors’ surgeries (of which there is only one in the area) and nurseries, causing problems for those services and the rest of the community.

‘We are now campaigning with residents for an Area Action Plan for Clapton – something we have been promised by Hackney Council since 2005 – which will help put a stop to such developments and start to bring about a unity to Clapton’s environment.”

David White, secretary of Beecholme and Casimir Tenants’ and Residents’ Association, said, “The proposals are no different from last year or the year the before in the critical areas of density, height and loss of original structure.

“The saving of just three walls, while gutting the rest, seems more a cost saving exercise than anything. Unsympathetic is understatement in the extreme.

“I hope that the Area Action Plan for Clapton will prove a solution and brake to the “rush to develop” fuelled, I’m sure, by the approaching Olympics.”

According to Mr White, 326 local residents have signed a written petition objecting to the plans so far, contributing to the total of 582 objections (to 16 January).

Note: Following feedback from readers, this story was updated at 7:30pm Monday 1 February 2010. It was further amended on Monday 19 July 2010: the name of the developer is Upper Clapton LLP, not Clapton Road LLP as previously stated.