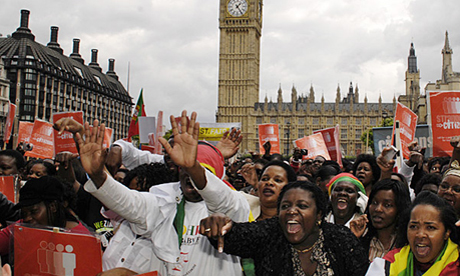 Calling for a migrants’ amnesty - Strangers into Citizens rally at the Houses of Parliament Photo: © Chris Jepson

The ever-present immigration debate has recently intensified due to the election of two BNP members to the European Parliament.  The Mayor of London, Boris Johnson, has also weighed in on the issue, and renewed his call for an amnesty on undocumented migrants.

As Jessica Jones of London Citizens’  Strangers into Citizens campaign explains, “By making better use of the human capital and the skills pool in this country, and by bringing ‘shadow workers’ within the scope of the law, a one-off regularisation would make a hugely positive contribution to both our society and our economy.”

Regardless of the debates around the abstract figures and statistics, there are many organisations already working with migrants at all stages on the path to citizenship, helping them to improve their personal circumstances.

One such organisation is the Hackney Migrant Centre, based in Stoke Newington. The drop-in centre offers people a free meal, alongside advice on immigration and welfare issues within a sociable and supportive environment.

Whilst visiting the centre I met H (he wished to remain anonymous) who explained his situation to me: H is from Ethiopia, where he was a member of the main opposition political party. He came to the UK seeking asylum 15 years ago after fleeing from persecution in his home country. He has been refused asylum.

H has a qualification in I.T. from a University in Cuba and has been working in this field in the UK, however his work permit was recently cancelled. H wants to settle down and start his own family but doesn’t feel like he can until he feels secure in this country.

H appeared to be someone friendly, intelligent and qualified who was willing to contribute to the economy, society and culture of our country – however the laws of our country seem to be edging him ever closer to social isolation and destitution.

And as is so often proven, destitution and marginalisation will push people towards unlawful behaviour – thus, ironically, exacerbating existing social ills.

As residents of one of the most diverse boroughs in the UK, we can see the challenges but also the huge benefits of cross cultural integration.

Ours is a borough with a rich and varied history of migrant settlers, with each group bringing its own distinct language, food, customs and traditions into our daily lives.

This diffusion of outside groups can greatly enhance our own existence, even if it is simply the appreciation of a good salt beef bagel on the Friday night stumble home or a Saturday afternoon trip to the Turkish barber.

A recent study by the London School of Economics, commissioned by the Mayor, puts the estimated number of undocumented or ‘irregular’ migrants in the country at around 725,000, with an estimated 442,000 of those living in London.

The proposed regularisation program would benefit those who have been in the country for over five years, did not have a criminal record (a contentious point considering most will have broken at least one of our immigration laws to be here) and could pass a citizenship test.

The study estimates that nationally around 412,000 people would be eligible for the earned regularisation scheme.
From a fiscal point of view, the economic benefits of the scheme would appear significant. The LSE study estimates that regularised migrants would add some £3 billion per annum (or 0.2 per cent) to GDP.

On top of this, those regularised might generate a total of £846 million per year additional tax revenue.

This would be offset against a possible increase in public service costs of £410 million per annum (potentially rising to £1bn depending on uptake of welfare benefits).

There would also be a one-off cost of £300 million to administer the scheme. However, this last cost appears rather meagre when compared against the £5 billion it would cost to simply remove all undocumented migrants from the country.

← Another Clissold leisure disaster?Looking after the carers →