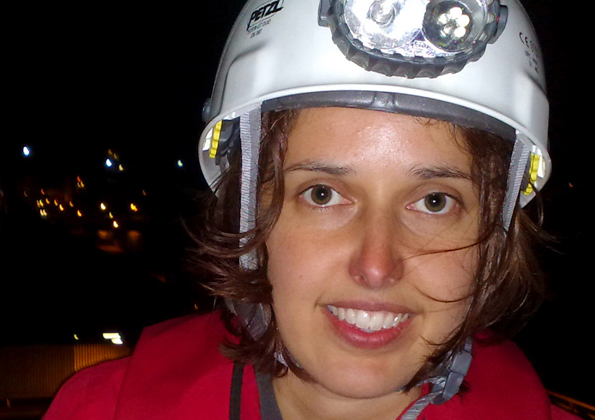 IN 2008 she was arrested at Heathrow and found guilty of being in a restricted zone and illegally boarding an aircraft (its tailpiece to be precise) for which she was given an 18-month conditional discharge and fined.

She made national headlines again in June this year after her arrest on charges of conspiracy to commit criminal damage whilst having an unauthorised presence on a ship. But in spite of these and other brushes with the law, she has no intention of reforming her character.

Who is this incorrigible woman? A dangerous terrorist gang member, or perhaps mastermind of a people-trafficking ring intent on researching the best mode of transport for its victims?  In fact, this sweet-faced 31-year-old Hackney woman is just doing her job working for Greenpeace to fight environmental destruction.

Sarah Shoraka’s vertiginous stand on the British Airways tailpiece was about trying to stop the third runway at Heathrow, and her scaling the hull of a coal ship in the river Medway (for which she trained on a caving ladder to build upper body strength) was an attempt to prevent it from delivering its dirty cargo to the Kingsnorth power station.

She explained why to the BBC: “Because coal is the most climate-damaging fuel known to man. If we keep burning coal, we can’t beat climate change”.

I meet Sarah at the Blue Legume on Church Street and very quickly it becomes clear to me that I am not interviewing a gung-ho adrenaline junky who will ‘grow out of it’ once she’s thought through the issues properly.

It seems that Sarah has been thinking through these issues very properly since she was a schoolgirl; her teenage angst apparently spent contemplating society’s ills and wishing she could do something to “right the wrongs”.

This culminated in a 15-year-old Sarah writing to Tony Benn (of whom she had been a long-time admirer) setting out her views on social justice, and asking him for careers advice. To her delight, Benn wrote back recommending she “become an activist”.  This, says Sarah, is something that definitely inspired her.

She recalls growing up in the low-income part of Blackburn and feeling a strong sense of how wrong it was for poor people seemingly to be denied opportunities available to their richer counterparts. Neither of her parents went to university, so when she did, she joined a ‘buddying’ scheme encouraging children from schools in deprived areas (including Hackney) to go to university too.  Other volunteer roles followed, but she finally found her niche at Greenpeace where she has now been working for six years.

So how does an English Literature graduate who wants to eradicate poverty end up as an eco-warrior? Sarah thinks it may have been the increasing incidence of climate-change-associated natural disasters that turned her interest to the environment.  In any case, “it is”, she says, “still the poorest people most affected by environmental injustices, so I’m still doing what I’ve always wanted to do – helping the poor.”

I am struck by the ease with which Sarah articulates all that her work involves. She smiles a lot, even when she’s talking about unpleasant things, like cattle farming causing deforestation in the Amazon, and the associated leather trade using slave labour.

When I ask whether it ever depresses her that people’s behaviour is hard to change, because their interests are often selfish, she laughs and says, “Yes, I do get frustrated at the slowness of change. But seeing what some people are trying to do can sometimes be just as important as a good end result. I suppose I have always been a very positive person.

“I’m sure I would have found being a nurse, for example, far more distressing, having to watch suffering first-hand…but I work with some very inspiring people in other countries who are directly affected by environmental problems, and I get to bring their problems to the attention of people over here.

“One of the things that’s happened over the past few weeks is that Clarks shoes have promised not to buy leather any more from a company in Brazil that’s responsible for the illegal destruction of the rainforest.

“And now we have Nike, Adidas, and others following suit. When I explained what was happening in Brazil to this man at Clarks, it was obvious that he had been completely unaware. So he agreed to try and get his organisation to change things, which they did.

“It can quite literally be down to the individual – another person could easily have decided that they were not going to work with us.”
This story is a victory for her campaign, and is one for which she has not, as yet, had to scale a perimeter fence, or tie herself to a mast.

“Direct action”, she says, “is something we do only after we’ve tried every other democratic means – writing letters, meeting business people, politicians etc – it’s only if they’ve refused to listen that you do it as a last resort.”

I ask who her favourite politician is, and she replies,“Well, it’s not so much my ‘favourite’ politician as the one that I find most interesting.  Peter Mandelson. I mean, he stands for all the things I’m against.  He doesn’t understand climate change, or the issues about coal-fired power stations, or the third runway, but he is so slick when he speaks on the TV or radio.

“And then there’s Ed Miliband who I think does understand these issues – he’s a bit different to other politicians in that way, but he struggles to resist pressure from big business. …..actually, now I’ve thought about it, Caroline Lucas is my favourite politician, but I suppose I would say that, wouldn’t I?”

It’s time to wrap up.  I’ve noticed that Sarah is brown as a berry, and I know she’s been away on holiday. I’m not expecting her to tell me she’s  been drinking biodynamic wine from the vines of a Hackney allotment whilst sunning herself on her FSC-certified deck in Stamford Hill (when at the same time the rest of us rack up carbon miles on Easyjet).

But I am secretly hoping for something flawless to keep my day on a high.  And I am not disappointed.  It turns out that Sarah has not flown for six years.  Six whole years!

“It’s a personal decision” she says, “and I’m certainly not telling other people that they shouldn’t fly at all. But it is my view that flying is totally unnecessary for short-haul journeys.  I’ve just come back from a holiday in Spain.  I took the train to Barcelona, and it was such fun!”

← Hackney left behind as Britain goes digitalIs it art? You decide →