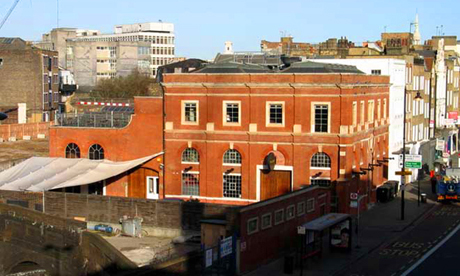 The Light Bar and Restaurant on Shoreditch High Street

A beloved Shoreditch watering-hole has avoided demolition following a successful 18 month campaign to save it.

The likes of Tracey Emin and Madness singer Sugg joined forces with OPEN Shoreditch to fight against plans to turn The Light Bar and Restaurant on Shoreditch High Street into a 51 storey skyscraper.

Rebecca Collings, co-chairwoman of OPEN Shoreditch said, “The changes to the Bishop’s Place scheme indicate that the developers are more willing to listen.

“We hope to move forward in search of win-win benefits for the community and sustainable development proposals – for both the developers and the local authority.”

Back in February, the group lobbied Hazel Blears, the then Secretary of State for Communities and Local Government, as well as English Heritage, who in turn recommended that The Light become part of the Shoreditch Conservation Area.

Although Hackney Council, as part-owner of the site, was poised to gain around £10 million in planning gain as the plans stood, its councillors were persuaded to protect the bar from being flattened.

The decision put a major obstacle in the way of the £500 million scheme by the developer mogul Hammerson, who intended on building offices, homes and a hotel on the former electric light station.

Hammerson maintains that the revised plans, known as the Bishops Place regeneration project, will further enhance the Shoreditch experience.

Martin Jepson, the managing director of Hammerson said, “We believe we have found a way to incorporate the building into the proposals.

“We are now preparing a scheme to submit to the Council that recognises this Shoreditch landmark alongside delivering much needed investment for Hackney.”

Commenting on the news, Heloise Brown of The Victorian Society said, “We are delighted that Hammerson have recognised the importance of the Light and the strength of local feeling for the former power station. We welcome revised plans that integrate the Shoreditch High Street Conservation Area into the redevelopment scheme.

“The Light has been a pioneering symbol of the East End since it was built in 1893 to generate electric light for the nearby Liverpool Street station. Its historic importance to the area is evident from Shoreditch’s motto adopted in 1900: ‘more light, more power’.

“The Light is now one of the only remaining pieces of evidence of an area once characterised by its industrial function and where many historic railway buildings once existed.

“It is also the first building in Hackney on the route north past Liverpool Street. It represents the very marked divide between the commercial high-rise buildings of the City, and the smaller-scale brick buildings that line Shoreditch High Street conservation area. It is visible all the way south from Bishops Gate and is a landmark for the area both historically and now for the vibrant diversity that characterises the East End.”

The amended plans have yet to be unveiled to the public.

OPEN Shoreditch was formed by local residents in January 2008 to resist inappropriate development to the Shoreditch area.

More on this issue here.