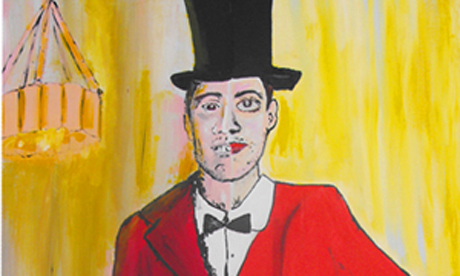 Come marvel at scenes of the absurd, grotesque exaggeration and dancing girls…Wonder at the wild musicians…See Royal Academicians in compromising positions…Witness the amazing Suitcase of Surprises…Be flabbergasted by the Cabinet of Curiosities…

Among the paintings on view, Royal Academician Tracey Emin sensationally leans out of her tent, fondling a vertically-challenged person’s genitals.

Elsewhere her ex Billy Childish appears with two masked strong men groping his buttocks, and in other scenes, circus animals and pets engage in inter-species sex.

As a late edition to the show, a portrait of Michael Jackson remembers him at his peak, just before the circus surrounding his life kicked in…

Sex, delinquency, parody and alternative culture are some of the themes running through the show ‘Summer Exhibitionists’, based upon the exploitative acts of Vaudeville and Sideshows of the late 19th & early 20th century.

Thriving on the margins of legality, promising to show the unshowable, but never in reality quite crossing the line, ‘Summer Exhibitionists’ contains the explicit, un-pc scenes that possibly provide what the early audiences were hoping for, coupled with the disappointment of what they actually got.

Burlesque artiste Ruby Tuesday will tease and tantalise, while comedy will be provided by alternative poetess Madeleine Dunbar.

Performance artist Mimi Norrgren will captivate from within a travelling trunk and there is also painting from Boa Swindler, Sardine & Tobleroni, Enzo Marra and Chiara Williams, sculpture from Matt Day, installation from Lorraine Clarke and video from Eva Lis.

Headlining the entertainment is rising local band Honeytrap, who will be performing two sets, both in the park and in the gallery. Their odd but exhilarating ‘Mussolini’s Son’ was picked up on by David Bowie, who in March 2007, made it number 1 on his Times column listening list.

Whilst scouting for something special to headline their summer event, WW was blown away by Honeytrap’s monumental talent at a recent gig. They had no choice but to book them immediately, upon hearing the synchronistic lyrics “in a sideshow/ in the circus of the freaks…”

On Saturday 4th July, Debra Wilson and Chiara Williams are the mistresses of ceremonies to a variety of ‘acts’ with a saucy and satirical edge. ‘Summer Exhibitionists’ is at WW Gallery and Hackney Downs park, from 3 to 9pm….it’s the greatest summer exhibition on earth!

For more information or to arrange an appointment, contact Chiara or Debra at +447531342128 and wwgallery@gmail.com